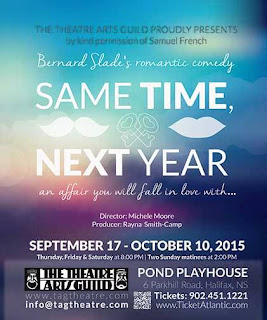 How long have you been involved in theatre, and in what capacity?
As happens for many performers, my interest in theatre peaked while I was in high school. During those years, I brushed up my Shakespeare playing Desdemona, tended to the Von Trapp children in The Sound of Music, and danced the highland fling in Brigadoon. I moved on to work with the Gilbert and Sullivan Society of Nova Scotia for five years, as a performer, assistant director, stage manager, and choreographer. My home away from home for the past ten years has been Theatre Arts Guild, where I have enjoyed on going experiences as an actor, a stage manager and an assistant stage manager, and now, a Producer. I was invited to be part of the Artistic Committee years ago and for the past three seasons have been the Artistic Director.

How did you get involved with this particular production?
It is not easy to say "no" to our Director, Michele Moore. She is too much fun to work with! She contacted me in July to ask if I would be willing to take on the role of Producer, a position for which I had no previous experience. As the cast and crew are relatively small in number, I decided it would be good time to test my capabilities in that facet of theatre. An Assistant Stage Manager had not yet been secured, but as I knew I would be spending a lot of time at the theatre, I decided to accept those additional duties. I had the pleasure of reading this play while I was Artistic Director, so I was pleased to accept the Director's invitation to be involved, both on and off stage.

What are the challenges involved?
Same Time, Next Year has a two person cast and therefore requires a lot of effort on the part of the actors to keep the audience engaged. This play spans a period of twenty-four years and the subtle set changes, music, props, costumes, and historical references are particularly important in order to maintain the flow of the action and provide the illusion of the passage of time on one hand and the unchanging bond between the protagonists on the other hand. For the characters to portray the progression through the time period and the changes in the world over nearly a quarter century, without changing their emotional connection to each other, requires dedicated performers who are very comfortable with each other and know their script so well that both that emotional and also the physical connection appears natural.

What are the rewards?
The rewards are those that follow from almost any production when you are there from the moment the cast and crew are chosen and are fortunate to be able to watch the progression that occurs as a play comes together. Everyone who is part of the development of a play surely must feel at some point that they have been important in the creation of something that will entertain.

What can audiences expect during the run?
Audiences should be prepared to laugh, cry and fall in love with love. This is an accidental love story about two people who do not have day to day interaction and must live a whole year of their relationship in one night. It is a funny and yet poignant look at the struggles of life and love. 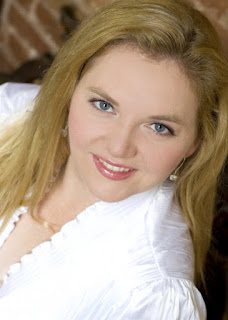 What are your thoughts on the state of theatre in Canada?
I am sometimes concerned about the future of Professional Theatre in Canada. It is no secret that the costs of maintaining theatres, both the larger venues as well as those in smaller areas, is not supported by ticket sales alone. The constant effort to secure funding for artistic endeavors of any kind, as well as the struggles of actors to support themselves in this career, are matters that are well known to anyone who follows Canadian theatre. Private and public funding remains very critical. Amateur theatre in Canada is different. Most local theatres are well respected, fairly well attended and usually manage to survive on minimal funding with a lot of devoted volunteers. Those who are interested in being involved in good theatre and attending good theatre always seem to be ready to lend a hand, fill a seat, or tread the boards. It would be wonderful to have public funding for amateur theatre, however that often comes at a price - loss of artistic freedom.

What's next on your creative agenda?
I hope to continue to develop my confidence as a performer and would like to try directing. The theatre is always in need of people to learn technical skills, which are just as important as the artistic skills, so I will always be learning from the pool of talent that exists off-stage. All actors want to be discovered...I'm waiting!