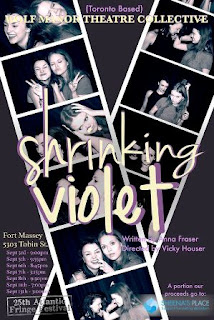 The Atlantic Fringe Festival in Halifax continues this week with Shrinking Violet, the compelling story of one young woman’s struggles with an eating disorder. Recently, AE spoke with writer Anna Fraser and director Victoria Houser about the production.

What are your roots?
Vicky - I'm a graduate of Ryerson Theatre School, and am now a Toronto based actor/director/producer. I grew up in Halifax where my early acting career began at Neptune Theatre School. I've worked with local artists such as Martha Irving, Jeremy Webb, Garry Williams and Samantha Wilson.
Anna - I'm also a Ryerson Theatre School graduate, and began writing Shrinking Violet in 2010 during my high school years. I'm now a Toronto based actor / playwright / producer.

How long have you been involved in theatre, and in what capacity?
Vicky - I've been involved in theatre for as long as I can remember, and grew up taking classes and acting in the youth shows at Neptune Theatre here in Halifax. My professional career began in Toronto upon completing the Performance Acting program at Ryerson Theatre School. Shrinking Violet was my directorial debut when it first premiered at the 2015 New Voices Festival. Last year I co-wrote and produced a full length musical called And Now, The End which took place in the 2014 SummerWorks festival. I have participated in a wide range of work in Toronto, from singing back up for Colm Wilkinson at his tribute concert to collaborating with various independent theatre companies.
Anna - I come from a primarily film based back ground. I even appeared in Mr D., which brought me here to Halifax for the first time! Shrinking Violet is the first full-length play I've ever written, and it's first draft won the Tarragon Under 20 Playwriting contest in 2011. I completed the Performance Acting program at Ryerson Theatre School this April.

What inspired this particular production?
Vicky - I was inspired to join this production when I first read Anna's script and realized the important message it carries. She has used the perfect balance of humour and sincerity in her dialogue to convey this story, which made it easy for me to jump on board with my interpretation.
Anna - This story is based off a combination of personal experience and research I've done on the topic of eating disorders. They are often misrepresented in the media and are portrayed superficially. I wanted to create something that really showed what it felt like to have an eating disorder, in order to create a deep understanding for the audience members.

What are the challenges involved?
Vicky - Directing a show in one city and bringing it to another is a challenge within itself, both creatively and financially. Also, being a first time director and trying to develop a dialogue with your actors can be confusing for everyone involved. Luckily the cast is killer and have been amazing about solving problems as a team and not making me feel like an alien when what I've asked them to do makes no sense.
Anna - As the script is still a work in progress, it was challenging to act in the main role and also objectively look at the text as a playwright and see what changes needed to be made. I was lucky to have a director who has been involved in the playwriting process before and could act as a dramaturge and help me make the appropriate cuts and adjustments.

What are the rewards?
Vicky - Being able to return home with my work for the first time has been so rewarding, and I feel so incredibly privileged to be working with this fantastic team on this important story.
Anna - The goal is to open people's minds about eating disorders, and so the most rewarding part of this process for me is when someone who has seen our show tells me afterwards that they didn't realize that that was what eating disorders were like.

What can audiences expect during the run?
Vicky - An important story told with dark humour by an incredible cast of young actors.
Anna – A lot of costume changes.

What are your thoughts on the state of theatre in Canada?
Vicky + Anna - We feel that young artists are the future of Canadian theatre, and we should be given more opportunity and funding to create and present new work. Young female theatre artists in particular need more representation, and so we are both proud to be contributing our work to the Canadian stage.