The Story of a Sinking Man 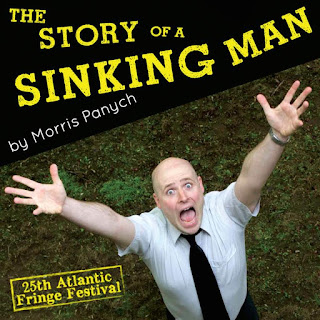 Starting this Thursday, the Atlantic Fringe Festival takes over Halifax for 11 days. This year, the annual gathering kicks off with Morris Panych's The Story of a Sinking Man, the tale of Nash, whose life hasn't amounted to much - or so he discovers when he suddenly finds himself slowly sinking to death in a mud puddle. Recently we spoke with actor Andrew Chandler about the production.

What are your own roots?
I grew up in Waverley, NS, just outside Halifax. My folks were both in medicine, but loved the arts, which is why my brother and I both studied music, I suppose. That’ll learn them. I did a Bachelor of Music in Percussion at Mount Allison University, where I played in the pit band for the school musical, and found I was envying the performers ONstage, more than my role below it. So, I started doing more and more acting, and eventually went on to study Musical Theatre at Sheridan Institute in Oakville, Ontario. I lived in Toronto for a few years, Vancouver for a few months, and then came back to Halifax, where I’ve been the past 7 years.

How long have you been involved in theatre, and in what capacity?
I’ve been an actor since my grade 3 production of “Sylvester and the Magic Pebble”, which I directed and starred in, about a donkey who finds a pebble that turns him into a rock for years and years. Professionally, I’ve been performing since 1999. I’ve been an actor, musician, writer, director, composer, producer, improviser and pizza enthusiast, as need has required.

What inspired this particular production?
I first saw “The Story of a Sinking Man” at Mount A, when another student performed it as a degree-end project. This script has stuck with me since then (15 years!), and when the opportunity came up to do it, I leapt at it. I love the humour and wit of Morris Panych’s writing, which is paired brilliantly with this huge heart, and fear about how we’re using our time on earth. There are these incredible images and flights of poetry that are so beautifully evocative, but totally accessible, followed up by these amazing, hilarious punch-lines that bring the whole thing back down to earth  And all the while, it’s this amazing situation: a man is sinking in a mud puddle, and has to talk himself out of panicking. It’s a gift of a piece to play, with an unusual premise that gives these rich, rich moments of truth.

What are the challenges involved?
It’s a one man show, so if I forget a line, there’s no one to save me. And it’s a rigourous performance - Nash, the sinking man, keeps his calm by talking to the imaginary press corps at the press conference following his rescue. And then they start talking back. Later, he’s joined by a talking bird, and a malevolent creature that seems to live in the mud. In the end, I play about 5 different characters, all expressed through one man’s viewpoint, and the tricky thing is: they’re all him! Lastly, our production had the extra challenge of creating the magic of Nash sinking into the mud: each scene, he sinks a little deeper into the mud. How to create that magic was a huge challenge, but we’ve approached it in a way that’s simple, crystal clear, wonderfully theatrical, and also, deeply scary. And now, as I look back at the challenges we’ve faced, I realize I don’t do things in small measures!  =)

What are the rewards?
I’m so excited to perform this one. It’s big, exciting script for me to be tackling, with so much to say about life, about love, about hope, and how we get through the world. I love the humour and the joy and the FUN of this play, as well as the powerful imagery and poetry of the text. It’s like no other show I know, in how “full” a piece of writing it is. I really can’t wait to share it with Halifax.

What can audiences expect during the run?
Expect to laugh, to think, to feel, and, when you leave, to watch where you step!

What are your thoughts on the state of theatre in Canada?
The idea that theatre is dying has been around for a long time, and I don’t know that I fully agree. I think there are a lot of bigger institutions that are struggling to find an audience, and so tend to program art that “makes us feel good”, more than it shakes us up. But to me, that latter is the reason I go to the theatre - to feel, to think, to have an experience with another human in the same room telling us a story, and collectively, as an audience, reacting together. I think that hasn’t changed, and I don’t think that’s an experience that we've have outgrown. We point to declining subscription numbers and think people don’t care anymore, but at the same time, with the “golden age” of television we’re experiencing, it seems like people have never been hungrier for a good story, well told. I think theatre can feed that hunger, but a lot of people think theatre should be a certain way, either “popular” to the point where there’s nothing challenging in it, or pretentious to the point that no one but the artist understands it. I think theatre has to reflect its audience and challenge them to examine their pre-conceptions. It’s hard to do, especially when sometimes it feels like it’s not incentivised by most funding models, or, say, valued by our government, but I think theatre has to live in that space - to tell us unusual stories that make us think about others’ perspectives, and more importantly, empathize with them.