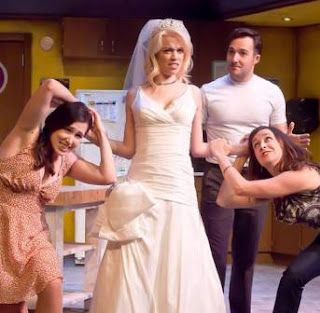 Until February 7, Neptune Theatre in Halifax presents Mark Crawford’s warm and witty wedding romp through the perils of pre-nuptial shenanigans Stag & Doe. Recently we spoke with lead actor Daniel Gervais about what audiences can expect.

What are your own roots?
Cape Breton Irish/Polish and Quebecois. I grew up in the Annapolis Valley.

How long have you been involved in theatre, and in what capacity?
I performed in my first play in high school. I studied theatre and worked in Newfoundland for a few summers before moving back to Nova Scotia where I’ve been performing with independent and professional companies.

How did you get involved with this particular production?
Apparently, my audition went well.

What are the challenges involved?
This show is very much about timing. There are many elements that need to come together just right to tell the story.

What are the rewards?
Getting to work with such a talented cast and creative team. I am eager to share our story with an audience.

What can audiences expect during the run?
Lots of laughs, a dash of drama and a little bit of action!

What are your thoughts on the state of theatre in Canada?
I think we have some great theatre of different genres happening. And I think we’re rising to the challenge of attracting and engaging audiences in a digital instant-access world.

What's next on your creative agenda?
Hopefully I will return to Shakespeare by the Sea for a third season. I am writing a solo show I hope to produce in October. I’m also working with a friend on developing a Holiday variety show for December. My goal for this year is to give back what I can to the arts community that has supported me all these years.