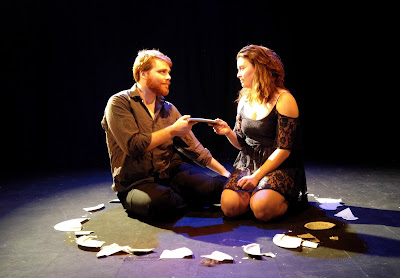 Starting this week, Terra Novella Theatre in Halifax presents Jack and Jill, an abstract look at the realism of modern day romance. Recently we spoke with lead actor Nicholas Cox about what audiences can expect.

What are your own roots?
My roots are grounded with my family. I was raised in Timberlea, NS next to a softball diamond, upon which I played for as long as I can remember. In my earliest years my life revolved around this field. My father ran the local league which I played in from the age of four. I once considered myself the most competitive young softball player in the province. A lot of kids were good at soccer or hockey, but softball was my game.

How long have you been involved in theatre, and in what capacity?
My first memories of theatre were from taking part in church productions. I played a formidable sheep in our Christmas pageant. My first speaking role was in a grade six school production of The Music Man, in which I proudly sang soprano in the quartet. I didn't dedicate myself to the arts until I attended Acadia as a member of their theatre company. It was there that I found my passion for the stage and learned to respect myself as an artist. Following a summer performing with the young company at Festival Antigonish, I moved to downtown Halifax.

How did you get involved with this particular production?
This production stemmed from a monologue I did in an audition. The script was very truthful and I found the connection I had to the titular character of Jack was very deep. My girlfriend Audrey and I read the script together one night and upon turning the final page we sat in welled-up silence, reflecting on how viscerally similar Jack and Jill were to ourselves. We read other plays looking for something near as truthful but found nothing that spoke to us quite like Jack and Jill.

What are the challenges involved?
Undeniably the biggest yet most rewarding challenge of this production was being truthful in my acting with Audrey. She is someone whom I have so much love for outside of the show that connecting to the heartbreak and longing of our characters was a difficult task. There were a number of times we had to step back from the script and remind ourselves that the flaws of the characters and their relationship were not our own. Honouring the truth and justice of these characters, without allowing their problems to slip into our own lives was a challenging. The struggle of not making this show a parody of a relationship but making it a truthful reflection of modern romance has proved to be our biggest hurdle.

What are the rewards?
Despite the challenges of acting with your girlfriend on stage, we found we grew and strengthened as a pair outside of the show because of it. I am honoured to have been given the opportunity to perform with someone I care about so deeply and also to be producing this show with a team of some of my closest friends. Our team, consisting of Chelsea Dickie (Stage Manager), Alex Mills (Production Assistant), Johnny Cann (Lighting & Projection Designer) and Audrey Eastwood (Artistic Director/Actor), has been impeccable in their dedication to this project and I find it very rewarding to have a group of people that shares my excitement. From the show's inception, Terra Novella has received some outstanding support from the theatre community in Halifax, as well as our friends and family. The most rewarding part of this show will be simply to show them our hard work. 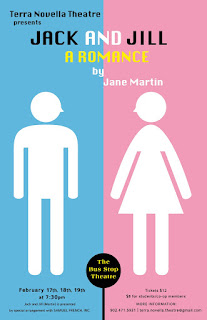 What can audiences expect during the run?
Audiences should expect to see the arch of a couple over a number times and places in their lives. The show has heart, yearning, but also a great deal of humour. The characters aren't simply woeful lovers who tragically fall apart like Romeo and Juliet. Jack and Jill are, at the beginning of the show, two post-divorce human beings who are in the process of learning about themselves and where to go at this stage in their lives. Audiences will see how these two characters adapt to being in the same space with different goals while sharing a passion between each other that ignites fiery debates and also funny and tender moments between the two scarred lovers.

What are your thoughts on the state of theatre in Atlantic Canada?
I believe that despite that unfortunate toll that the recent film tax credit has taken on the region, there is still outstanding theatre being produced in Atlantic Canada. From the larger stages like Neptune to smaller venues and collectives like The Bus Stop Theatre Cooperative, there are plenty of artists still eager to create work and take part in this welcoming community. The great artists I have met in this region are unendingly dedicated to making unique and exciting theatre happen. As long as we as an artistic community continue to support and promote the excellent work being done in this region, we will one day get over this bump in the road and thrive as a locale for art once again.

What's next on your creative agenda?
Following the wrap of this production, Audrey and I are going to be taking some time to focus on making music and busking as our duo Guy & Doll. As spring time dawns upon us, we are ready to hit the streets and entertain passers-by with our groovy acoustic covers. We are hoping to record an album later this year. As for theatre, Terra Novella will be creating an original production for the Fringe Festival in September as well as another work for the years’ end. 2016 is going to be a big year creatively for us, and we could not be more excited at the prospect.