Getting Around the Rock 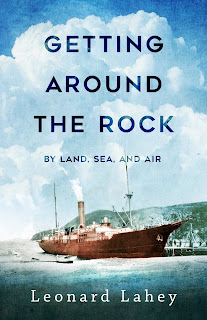 From the “Newfie Bullet” to the SS Kyle to Amelia Earhart, Getting Around the Rock is a fascinating history of the transportation sector, largely in pre-Confederation Newfoundland and Labrador. These recollections were passed on to author Leonard Lahey by his father, Raymond and his uncle, Bill, who spent their working lives as telegraph operators in the changing times of transportation in the province. Recently we spoke with Lahey about his debut effort.

What inspired you to write Getting Around the Rock?
The book began many years ago while I was living in South Dildo. My Uncle Bill Lahey and his son Chris had moved there after he retired. Earlier on, I had worked for my Uncle Bill in Gander and Gambo. At that time, he owned a movie theatre called the Crescent, a convenience store in the new Gander town site, vending machines in the airport and warehouses from which he operated a wholesale business. Still, I didn’t really get to know my Uncle Bill until he retired and moved to South Dildo. I would visit his home in the evenings and we would chat. This was when I became interested in genealogy. I was always interested in Newfoundland history and specifically the history of the Trinity Bay area. After obtaining what information my Uncle Bill provided about the history of the family, I began inquiring about his and my father’s days as young men when they started work. Then my Uncle Bill began telling me stories of events that happened while he was working with Reid Newfoundland Railway, Canadian Marconi, then the Newfoundland Coastal Boats. He went on to his involvement in the developing aviation sector with the Sea Plane Base in Botwood and the Newfoundland Airport during the Second World War. He went to Gander in 1939 and was in Gander when ten thousand planes were sent overseas to England for the war effort. He saw first hand the efforts and the tragedies of that time. Bill had witnessed the first simultaneous trans-Atlantic crossing of the flying-boats, the Pan American Clipper and the British Airways Caledonia. This was the beginning of trans-Atlantic civilian air travel. Bill followed up his wartime career with a career in civil aviation at Gander, which became the new trans-Atlantic hub. His various stories I recorded in detail, and if I required any clarification I would return the following evening for more information and a drink of dark rum. This was my uncles’ drink of choice, and an acquired taste of my own. I even used the same drinking glasses for many years after he passed. My father’s work experience ran on a parallel course. Although working in different sectors, my uncle and my father had much in common since they both had lifetime careers in transportation. My dad began learning telegraphy at the age of thirteen at the newly opened branch line of the Reid Newfoundland Railway. He continued his career with Newfoundland Government Railway, the Newfoundland Railway and later Canadian National as Chief Train Dispatcher in St John’s. Growing up we heard all sorts of stories about the railroad but my father was different from my Uncle in that you had to pry the information from him. Many of his close friends were railroaders and when they would come to our home you wouldn’t get a regular knock on the door but you would hear their initials being taped on the door in Morse code announcing their arrival. RJL, my father’s initials were known to all railroaders in Newfoundland. My own interest in the railroad stems from this and my summer employment with Canadian National when attending high school. I worked for short durations in Harbour Grace, Bay Roberts, Carbonear, Whitbourne, Clarenville, Alexander Bay, Gambo, Gander and Argentia. It was not until I had retired from the Marine Institute that I had time to do any research. I started to piece together these stories about my uncle’s involvement with the Reid Newfoundland Railway and the Marconi wireless stations, then coastal boats like the Kyle and the Prospero. This included stories he had told me about his involvement with the rescue of the survivors of the Viking explosion and the survivors of the 1929 tsunami in Burin, Newfoundland. Getting Around The Rock evolved from all these stories of my father and my uncle, as well from the photos and information I had collected about the province’s past, into something of a history of transportation in pre-Confederation Newfoundland.

What was the most challenging aspect of the process?
The more I researched, the more I realized how limited was the understanding of this part of our history. Even more, I saw that very little connected the personal histories of Newfoundlanders with the broader account of the major events that were changing the island and Labrador. While I wanted to tell the stories of my father and my uncle, I began to realize that these were part of a much bigger picture. A challenge, too, was trying to ensure that my factual information was correct; I made special efforts to check on the correct dates and the correct historical sequences for the major background events that transpired.

What was the most rewarding part of the experience?
The truth is that the more I learned through my research the more I wanted younger generations to know about our past, about the railroad, the coastal steamers, and aviation, and the important role that Newfoundland and Newfoundlanders played during World War II. Time is erasing these stories of my father’s and my uncle’s generation, and I felt something would be lost if they were not passed on. My objective was to pass this history and these stories so others would know about our past. It really feels good to have done my own small part in transmitting our history.

What did you learn during the process?
I learned, for example, that he railway, on which my dad had worked for a lifetime, really became the backbone that connected the island and its people. Then too, the information my uncle gave me about the aviation sector involving Botwood and Gander became the beginning of a learning curve for me. I was also surprised that at the beginning of the Second World War how little say the people of Newfoundland had about their own destiny, how little they knew of the political process that decided where the airports or the large American bases were built. As I was writing, I was struck by the fact that history could be very personal, and that the personal elements served to make the book especially interesting to the reader. The challenge then is to blend these personal elements together with the broader picture of events in which they operated and which makes far more sense of people’s actual lives and what and why they did things. 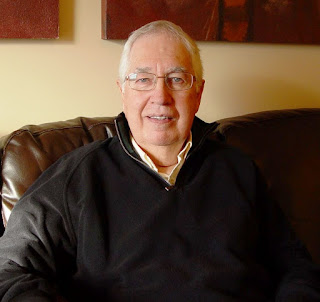 How did you feel when the book was completed?
Having worked on it attentively for several years, I obviously felt happy to have told what I thought was a great story, but I have to confess that I also felt relieved. Perhaps relief was at having put together so much information.

What has the response been like so far from those that have read it?
Reactions are only now beginning to come in, but they have been very positive. Still, perhaps the most rewarding reaction came when my eight-year old granddaughter Alena asked me why I wrote the book. Before I could reply, her older sister Rayne, who was ten, said “you know something nobody else knows and you want to share that information with others.” That was exactly my own sense in wanting to pass along something of the past to future generations.

When and why did you want to be a writer?
Getting Around the Rock is my first book. It wasn’t a ‘light-bulb’ inspiration. I really became a writer from looking at material I had collected over many years. It seemed to call for a story that was worth telling for a whole variety of reasons. In the family, I was the collector of family tree information, old family photographs, letters, railroad timetables and memorabilia from the past. It was what I discovered in collecting that led me to become a writer, not the other way round.

What's next on your creative agenda?
Having published a book for the first time certainly inspires me to think of other possibilities of untold stories. It could be a book on very early attempts at aquaculture in Newfoundland. There are some interesting stories there regarding the Newfoundland cod-fishery and lobster fishery.