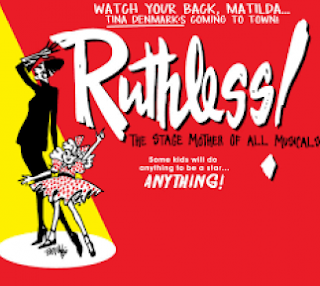 Until July 30, Chester Playhouse presents Ruthless! ~ a campy cult favourite in which the beautiful and talented 12-year-old Tina Denmark will do ANYTHING to play the lead in the school play … ANYTHING! The show famously spoofs Broadway musicals such as Gypsy and Mame, as well as classic films including The Bad Seed and All About Eve. Ruthless! is a 90 minute hilarious romp through the world of Broadway, child acting, parenthood, and unbridled ambition. Recently we spoke with actress Amy Reitsma about what audiences can expect during the run.

When and why did you get involved with theatre?
I started getting involved when I was 9 years old. My mom had many friends at the old Neptune Theatre, so we used to go to plays and musicals quite a bit in my youth. I always loved acting and watching theatre, but wasn't bitten by the bug until I met a young actor (who was probably 11, but seemed 18 and completely worldly at the time to my 10 year old mind) at an opening night party of the play 1949. He mentioned something about 'not getting paid enough' and it dawned on me that people actually got paid to perform. I thought that sounded like the best job in the world.

Are they the same reasons that you do it today?
Yes and no. Money is definitely not why I'm in this business, but the sheer love of the art and the people who make it hasn't changed. I never want to be someone who lives for the weekend. I've tried 9-5 and it doesn't suit me at all. Sometimes I wish it would, because I think it would make some of the choices I've had to make a little simpler. The grass is always greener, I suppose.

What are the challenges of the profession?
There are many, as there are in all professions. I find staying positive and staying motivated can be hard when you are in the midst of a dry spell. Certainly financial issues are frustrating and stressful at times. Also keeping yourself grounded and honest when it's time to network, and not losing yourself to the machine that the arts can be. That's the most important. Staying true to yourself and reminding yourself why you wanted to be an actor in the first place.

What are the rewards?
You get to do the job you love. Not many can say that. That's a huge reward.

How did you get involved with Ruthless?
It was all perfect timing, basically. I’m now based in London, England, so I haven’t worked in Canada for 2.5 years. I had been invited to come over and do a show with Zuppa Theatre at Magnetic North Theatre Festival in Whitehorse, which gave me the perfect excuse to come home to visit for a few weeks. I had planned originally to head back to London at the end of June. Kyle Gillis (who is also in the show) randomly sent me a casting breakdown for Ruthless, and I started thinking how nice it would be to extend my stay in NS and turn it into a proper ‘working holiday’. So I emailed Mary Lou asking if there was anything in the show for me. We’ve known each other for years but have never worked together, and luckily there was a great role that fit so she said yes, I changed my flight and here I am!

What did you know of the production previously?
I had heard of the song ‘Teaching Third Grade’, and ‘I Hate Musicals’, and that is literally all I knew of the show. It’s one of the funniest musicals I’ve worked on in a while.

As a performer, is it as fun to be a part of as it is for the audience?
It’s too much fun sometimes. The audience is always the final piece of the puzzle for any show, and the audience- performer relationship is SO much fun in ‘Ruthless’.  It changes every night and keeps us on our toes.

What can audiences expect during the run?
They can expect to laugh. ‘Ruthless’ is as far from ‘serious drama’ as you can get. It mixes so many different types of comedy and musical theatre references it can be dizzying at times, but in a great way. The first act is a perfect set up for act two, where everything gets turned on its head and the whole thing rampages towards the climax. The music is surprisingly complicated for a musical that makes fun of musicals, which was a great challenge for us, and Mary Lou has directed and choreographed it so the physical style of the piece is as fun for the audience to watch as it is for us to play.

Again, as a performer, what do you think of the Chester Playhouse? 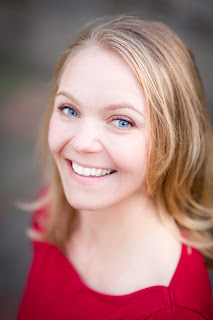 I can’t tell you how nice it’s been to come back home and work this contract. TheChester Playhouse is a beautiful space for an actor and audience member. The theatre itself is so well designed- the acoustics are clear and bright, and the sight lines of the space ensure there are no ‘bad’ seats. It’s very audience friendly. The bar upstairs has a beautiful veranda with a pretty view, and is run by lovely people. The creative team: Mary Lou Martin (director), Sarah Richardson (MD), the band (Chris Mitchell and Stephanie McKeown), Bob Elliott (set design), Mary Mills (costumes) and JennHewitt (our SM) have been incredibly easy and fun to work with, and the cast (Kyle Gillis, Katrina Westin, Cassie Muise, Kristi Anderson and Dominique Le Blanc) are undeniably some of the most talented musical theatre performers this province has to offer.

What are your thoughts on the state of theatre in Halifax & Atlantic Canada?
I think theatre is in good hands here. I wish there were more opportunities to study or train, and I wish there was more work. Companies like LunaSea, 2B, Zuppa, DaPoPo, Forerunner, among so many others are doing a great job of making sure that independent theatre doesn't die, despite the cutbacks to the arts that we are all experiencing. It's a hard time to be an artist in Canada, and I take great pride in my peers and have great hope for and faith in their future work.

What can we be doing better?
We can be encouraging our youth to go to theatre. We should be teaching them the value of live theatre and performance. We should be fighting the cuts that are being inflicted upon the arts in Canada, and we should be getting out there and supporting the arts by seeing shows and talking about them.

What's next on your creative agenda?
I head back to London in August, and other than a few voiceovers I’m not sure! I moved to a different part of the London the week before I came out here, so I should take some time to properly unpack and see my new neighbourhood and have an actual holiday. But if I know myself I’ll be emailing my agents from Heathrow airport as soon as I land…