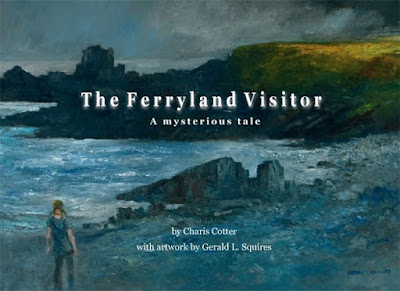 In the 1970s, artist Gerald Squires moved, with his wife and two young daughters, into the abandoned lighthouse keeper's house in Ferryland, NL. Shortly after their arrival, they had a visitor - one who claimed to be the former constable of the area and who regaled them with stories of the place and its previous occupants. A visitor, they soon learned, who was more than he appeared to be. Acclaimed children's writer Charis Cotter tells the tale of this mysterious visitor from the perspective of Esther, the youngest daughter. In beautifully crafted language, Cotter captures the delight of a curious young girl discovering her new landscape, the excitement of living in a lighthouse at the edge of the ocean, and the haunting mystery of the visitor himself.  Renowned artist Gerald Squires has contributed paintings and drawings of the lighthouse and its surrounding landscape, as well as family photographs taken during the lighthouse years. The result is a book of striking beauty - part family album, part art book, all mystery. Recently we spoke with the author about the work.

When and why did you want to be a writer/storyteller?
I think ever since I was in about Grade 4, when I really started to get into reading books, I had a hankering to enter that world as a writer as well as a reader. I loved escaping into my imagination and reading and writing both provided a framework for that. I was always making up stories in my head, and writing brought them one step closer to reality. But I also loved acting, and I pursued a career in acting for a while, going to drama school in Toronto and London, England. When that didn’t work out, I turned back to writing, and then I got into storytelling and doing dramatic presentations of my books in schools, so I was able to do two of things I loved best. Writing and performing.

Are they the same reasons you do it today?
Pretty well, yes. I still love escaping into my imagination. As I develop as a writer, I find it more and more deeply satisfying on a creative level.

What inspired you to put The Ferryland Visitor together?
A few years ago, Esther Squires and I spent some time drinking tea and talking about what it was like for her to grow up in a lighthouse. I was doing research for another book (The Painting: to be published by Tundra Books in 2017). Esther cast a bit of a spell on me as she talked about her magical childhood at Ferryland. We had a strong connection and I felt like I could see it all through her eyes. She had a lot of ghost stories and this was my favourite. I asked Gerry Squires for his version of the story before I wrote it, and then I showed it to the family. They all liked it and a couple of years later I approached Marnie Parsons from Running the Goat Books & Broadsides, and she was immediately enthusiastic about making it into a picture book. It was her idea to approach Gerry for the artwork, and then everything just fell together pretty quickly. Veselina Tomova did a very interesting design, using text, paintings, sketches and family photographs.

What was the most challenging aspect of the process?
I think that finding a happy balance of artwork and text was the most difficult thing about this book. My story has a dreamy, otherworldly tone to it, and so does Gerry’s artwork, and it was a challenge for Veselina to weave it all together with the old photographs.

What was the most rewarding part of the experience?
I think seeing Gerry’s artwork with my text was the most rewarding thing for me. His work is so evocative and beautiful. I am in awe of the way he can capture the spiritual beauty of Newfoundland. It was a real honour for me to have his work illustrating my text. Seeing it all come together made me very happy.

What did you learn during the process?
I think I learned that certain books have an inevitability about them. This book seemed meant to happen, and once the process started, everything fell into place. I also learned (once again! this happens at some stage in every book I do), that at some point you just have to let go and let it take on a life of its own. 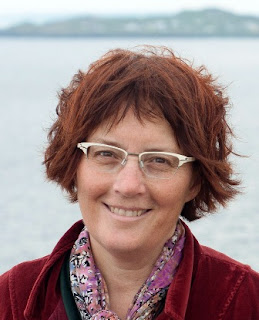 How did you feel when the book was completed?
Pretty darn good! And excited. This was my first book to be published in Newfoundland, so it was a landmark for me. And it’s just such a fine, beautiful book, with a gentle story and a strong sense of place, so it feels very special to me.

What has the response been like so far from those that have read it?
Everyone seems to love it. First they are struck by the artwork, but then when they read the story they like that too. There were many people at the book launch who had visited Gerry and Gail at Ferryland in the old days, and I could tell it meant a lot to them to have this visual reminder of what it was like then.

What makes a good book?
I think a good book is one that captures something real about life and makes some kind of music with it. It makes a connection between writer and reader, so that for a while the writer is inside the reader’s head and the reader is inside the writer’s. A good book involves both writer and reader to give over to the experience and share it. A good book makes me happy to read it. And a good book is a kind of friend – somebody comfortable and sympathetic who you’d like to spend a lot of time with.

Is your creative process more 'inspirational' or 'perspirational'?
Oh, I’d have to say a strong measure of both! Inspiration comes to me but it’s the hard work that makes something of it. Sometimes I find the creative process pure torture (although not with this book), and suddenly everything else seems like more fun to do, from mowing the lawn to washing the dishes. But then there’s the times when I lose all sense of time and I’m completely in that other world and then it’s pure joy.

What are your thoughts on Newfoundland's literary scene?
I don’t really have any. I don’t have much experience with it, except for waving to  Michael Crummey as he walks his dog past my house sometimes, or saying hi to Michael Winter before he sets off in his dory to go fishing at the beach below my place. They both have houses on my road.

What's next on your creative agenda?
My first novel, The Swallow: A Ghost Story, has done really well. Now I’m doing the final edits on my next novel, The Painting, which is set in both Toronto and Newfoundland. Gerry’s painting was an inspiration for this book, as well as Esther’s stories. And I’m working on my third novel, Ghost Road, which is set in a small Newfoundland community. I’m also doing some ghostly storytelling this summer and fall: I have a one-woman show of Newfoundland ghost stories.