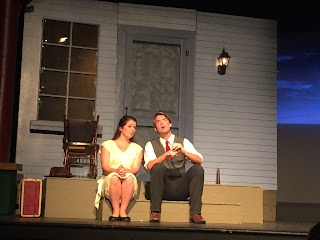 While Salt Water Moon is dubbed a love story, it is most the furious of love, the divine, the epic. Mo Duffy Cobb tells us more.

Set in the 1920s in Newfoundland, the play opens outside the home of Mary Snow (played by Marli Trecartin). Her eyes are on the stars, as she tilts her headback into her telescope. The tension is high as young Jacob Mercer (played by Fraser McCallum) comes up the lane and into the yard: Mary arches her back, pierces her eyes, crosses her arms and looks away. “The least you could do is make a fist,” says Jacob. The audience is immediately drawn into the other side of passionate love - relentless conflict.

“Black Beauty”, as her spyglass is affectionately known, spies the satellites of Jupiter as the two spar through their speckled history, up on Jenny’s Hill one night they shared together, “the new moon like a smile over the birch hills.”  The two were entwined, satellites moving towards the same sun, until Jacob up and moved to Toronto looking for work, at the end of the lover’s summer,. The harsh conditions of the Canadian Atlantic forced him to move towards responsibility, towards security, towards freedom. But what happens to the one who stays behind?

The Newfoundland accents add the depth of culture and the grain of experience to the play, giving it shape and form. The two thrash between tenderness and precociousness, each one interrupting the other for the last word, a meteor shower of words over Conception Bay. Mary, in a fit of haste, has become engaged to another.

Jacob’s attempts to woo with silks from “Timothy Eaton’s store in Toronto” fail miserably next to the raging supernova of Mary’s fiery spirit. But the two are deeply connected through the threads of time and history, their families both touched by the depletion of the men of the Newfoundland regiment, gunned down by German crossfire. They are tied together by the blood of their past—as their collective unconscious pushes forward the memory of that terrible day.

The audience discovers an irrepressible chemistry between McCallum and Trecartin that is as impossible to ignore as a full moon coming up over water. The contentious duo baits their hooks under their guiding star, Vega, the blue star. They know they’ve both seen it, hoped for it, dreamed it. But will Fortune steer them forward?

The earthly distractions of cruelty, jealousy, shame and expectation all play a part in the bigger picture of love and desire, set against the backdrop of the full moon and Newfoundland schooner. What the stars have in store for these young lovers is all the light they can handle.