Spoon River: A Journey Out of Life and Into Song Mo Duffy Cobb shares the magic of Spoon River, running until August 20 at the Charlottetown Centre of the arts.

Welcome to the magic of Spoon River, a production of movement and music that transcends life and invites us into the hereafter. From the Soulpepper Theatre Company in Toronto to Confederation Centre’s The Mack, the stories of Spoon River come alive: a series of fictional epitaphs of the long-dead residents of the community. Adapted by Mike Ross and Albert Schultz, the production showcases the verses of Edgar Lee Masters from his 1915 publication, Spoon River Anthology.

The show centers around the wake of a loved one, Bertie (played by Amanda LeBlanc) and the voices that have “carved our town”. From the moment the audience is greeted, there is mystery and intrigue. During the eerie opening, we are ushered through a graveyard where several tombstones stand in a lonesome grove of birch trees. The unusual setup peaks our interest even before begin the show, and reminds of us of our own losses, the light and darkness of those we’ve known, those precious to us who have gone on and never come back to tell.

We soon learn how fragile life is, and how bountiful, as those tailored for heaven begin to share their intimacies. All those “sleeping on the hill” soon rise again as intellectuals, “sailors of thought and seekers of the earth’s treasures”. We begin to see and feel the full spectrum, a celebration of life not just in Spoon River, but of all the world all around us. Soon the audience is being carried through the characters’ triumphs and failures, and consequently through our own sadnesses and strengths, as rich and complex as the music that delivers. The result is captivating theater.

Alive again are also the fashions of the early 1900s, apron-clad women with the wonder of innocence telling their stories next toothers in silks and feathers.The hard-lived men in coveralls we know well in Atlantic Canada have their moment to shine just as others from the upper class, drinkers in suit jackets and hiccups. The voices delivered are also in range, from Scottish to Southern and all walks of life. Spoon River does a lovely job of exploring relationships and ambitions, as we readily consider what it’s like to be gone too soon. 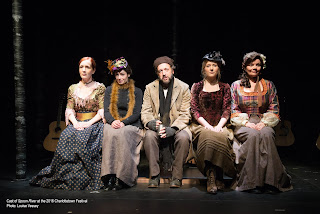 The heart and soul of the play drips with Masters’ poetics, a banquet of the whimsical, with the major chords of young love set next to the minor arcana of the homeless, the heartless, the criminal. Mike Ross, composer and co-adaptor of Spoon River, makes sure that we hit every single note. Check out Ross’s interpretation of musical theater versus music theater on YouTube here.

As the narrative arc of Spoon River unfolds, we listen with amazement as the voices from the other side welcome Bertie into the great beyond. With drummers drumming on her casket, the voices of the dead lift her up and into the discovery that another world awaits to greet her. The stars begin to align as young Bertie begins to sing, the voice we yearn to hear. This throws the audience momentarily into a cosmic tailspin, beyond death and into the beauty of possibility, of transcendence, of immortality. As Bertie reminds us, “voices departed but never forgotten.”
As the show ends we are not saddened but uplifted, emotionally recharged and alive in all that we touch, and reminded of the volatility of life. Spoon River is a highly recommended show that will resonate with audiences for days after. “Is your soul alive? Then let it feed.”
Spoon River plays at Confederation Centre’s Mack Theatre in Charlottetown until August 20th
Confederation Centre of the Arts, Charlottetown PEI
Spoon River 2016 Charlottetown Festival Trailer

Mo Duffy Cobb is a freelance writer who lives in Charlottetown, PEI. She has an MFA from Vermont College of Fine Arts and has been published in Literary Mama, The Rumpus, Damselfly Press, Understorey Magazine, Red: The Island Storybook and more. She is the Founder and Editor of Cargo Literary, an online travel journal that publishes transformational travel experiences, and her own memoir Unpacked is forthcoming in March 2017 from Pottersfield Press.