This week, a little comedy about sad times will run for eight limited-seating performances at the 26th annual Atlantic Fringe Festival in Halifax. dark matter  is a tiny, funny, micro-exploration of grief, told through a collision of astrophysics and the supernatural. Recently we spoke with writer/director Colleen MacIsaac about what audiences can expect.

What are your own roots?
I'm originally from Spruce Grove, Alberta, where I did a lot of visual art and theatre as a kid. I moved to Vancouver when I was eighteen to study animation, and then in 2007 my partner Dorian Lang and I moved to Halifax, on something of a quest for new adventures.  I love the people and the landscape and the scale of things here, and so we've been Haligonian-ing ever since!

How long have you been involved in theater, and in what capacity?
My first foray into theatre was as a skunk in a holiday pageant at age seven. I was very interested in theatre in high school, and fell into it again after moving to Halifax and being cast in a student production of Goodnight Desdemona (Good Morning Juliet), directed by Dan Bray. He and I now run The Villain's Theatre, where I've been producing and performing in work since 2009. I also work as managing director of 2b theatre company, serve on the board of the Bus Stop Theatre Cooperative, and am the founder of The HIT Book, a theatre listings initiative (which has just relaunched as The HIT List in partnership with Chelsea Code-McNeil). My primary interests are in performing and Making Things Happen, though I've also been doing a lot of writing as late. I generally like to explore things from all sides where possible, and over the years I have worn a lot of different hats.

How did you get involved with this particular production?
For the past eleven years, there has been an event called the 24 Hour Theatre Thing at the Bus Stop in the week before New Year's. Since I generally go back to Alberta at that time, I have never been able to participate, but I've always wanted to. This year, I realized that I might be able to take part as a playwright, which is easier to do remotely. I wrote the first draft of dark matter overnight, and it was performed the following day, though I sadly wasn't able to see the production. I received some good feedback from people who had seen it though, which was encouraging, and had me musing about doing something more with the script. When the Fringe application deadline came around this year, Dan and I we were looking for a short play we could produce for the festival - we knew Dorian would be leaving town in the fall to pursue a masters in directing at the University of Alberta, and wanted to find a project we could work on together. We submitted dark matter, I did a little more work on the script, and here we are today!

What are the challenges involved?
Because of the nature of the show (it runs only 15 minutes long, and was designed to be pretty minimal in terms of tech needs), logistically it's been less challenging than most Fringe pieces that I've worked on in the past. I think our challenges have been more in the rehearsal room, where we've spent a lot of time exploring the characters and what has brought them to this point. The script deals with people reacting to hard times, and also has weird little outbursts of humour, so we've been navigating that. I'm sure it's also been a challenge for the rest of the team to have the playwright as performer in the room with them. I keep wanting to tweak things.

What are the rewards?
This has been a very enjoyable process working with some of my favourite humans and long-time collaborators. I've loved being in the room with these great folks, and I'm nervous but excited to show what we've been up to with an audience. It's an honour and a pleasure to work with the team, especially Dorian, who will be flying out west at the same time as we open on Monday night - I think he's a brilliant director (he won Best Director at last year's fringe, so I'm not alone in that), and it's been great to have a chance to work with him once more before he heads out of town for a while.

What can audiences expect during the run?
As fringe shows go, we're pretty nicely stationed right in the middle of the Gottingen street hub, playing at the back of Plan B - it's a great space to lead you into the world of the play, as our set is an astronomer's detritus-filled house. Since we're 15 minutes long, it'll hopefully be a convenient show to catch. We're also doing two versions of the play, alternating nightly - the script is the same in both, but the actors are playing different characters, and the given circumstances and relationships have all changed. We've been thinking of it as a bit of a stereoscopic process, where we have two very similar pictures of the same thing, which when viewed together allow us to see it in a new, more nuanced way. The impetus for this was driven more from a place of artistic process than of audience experience - audiences can certainly see just one version and get the full story - but I do enjoy that people have the opportunity to take in both iterations if they'd like. 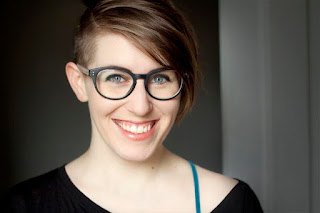 What are your thoughts on the state of theatre in Atlantic Canada?
Times have been difficult in recent years with the film tax credit ripples still being felt through the community, and now with the Chronicle Herald strike (many theatre companies and artists are boycotting the Herald in solidarity with the striking journalists, which has made it more difficult to get the word out about shows to those who reply on the paper as their main source of news), but despite that, I think it's a really exciting time for Atlantic Canadian theatre. There's a lot of energy, a lot of really interesting work being developed. It's been exciting to see things like the efforts that Eastern Front has been making recently to serve the community, the great lineup of female artists at the Prismatic Festival coming up later this month, and lots of activity with other festivals such as DaPoPo's upcoming Live-In. I've seen a lot of projects in development this year that I'm really looking forward to, and I think what I'd love to see is more audiences coming out to theatre. Fringe is such a great way to bring people in, and make theatre really accessible, and I hope some first-time theatregoers at the festival come back for more.

What's next on your creative agenda?
Concurrently with dark matter I'm diving into my next two theatrical projects, The Spanish Tragedy with The Villain's Theatre, and Tales of the Old North with Xara Choral Theatre, which are both going up in November at the Bus Stop and Alderney Landing, respectively. Also at Alderney Landing, I'll have a month-long solo show of my visual art at the Craig Gallery, entitled quiet processes, which features some of my daily art project.