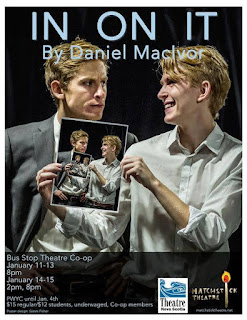 Have you ever watched a play about a play? A play that has only two characters, one story but at the same time many characters and many stories?

Presented by Halifax-based Matchstick Theatre on January 14, Daniel MacIvor's “In On It” is a true exploration of theatre and human life in a fresh, creative way. Critical thinkers will also find strong symbolism in the show that keeps the audience engaged on many levels, both as observers as well as participants. The actors uncover a simple truth: By watching what is happening on stage, we influence it with our emotions, reactions and we are being watched, too.

The play is composed of multiple scenes that are interrupted by actors discussing those scenes and asking each other for feedback. How often do you get to see the actors arguing whether the actual poster of the play is good or not? Breaking of rules, breaking of characters and standard theatre play surprise the audience and uncovers another way of perceiving the whole action.

Each scene represents a different piece of a puzzle. At first, we only get a small part of the puzzle and can feel its intensity but don’t know yet, what’s going on. Throughout the play, we are given more and more pieces and hints, and the whole story unfolds in front of our eyes. The play represents life – in all its complexity and simplicity. Trivial occasions and big heartbreaks. Marriage. Illness. Hooking up. Divorce. Childhood. Errands. Non-trivial aspects of regular things that each of us encounters at some point, in one way or another.

We notice how much miscommunication happens between people due to the lack of listening. We notice how to what extent things – like the choice of a radio station while you are driving – shape our reality, and how our reality shapes the reality of other people. The audience is also reminded of the importance of death and living each day as if it was the last one: One of the main characters is diagnosed with a deadly disease however he does not know when exactly his life will end. Presented with this story, we get a chance to explore our own mortality and the way we are living; we can choose to avoid thinking about it or we can face it and make the most of each moment.

After all, the play is definitely worth seeing if you are not afraid to face the intensity of life with its, comic and tragic moments, not shielded by pretty decorations. The ups and downs of sadness and laughter as well as feeling grateful for being alive are guaranteed.