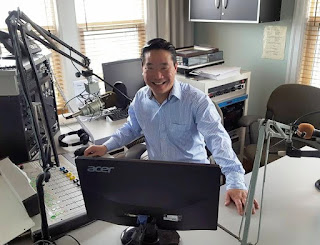 Even after almost 30 years as the voice of jazz in Halifax, Charles Hsuen shows no signs of slowing down. His passion to preserve and promote the genre to listeners of all ages cannot be overstated. Recently we spoke with Hsuen about his roots, and his life-long love of big band, bebop, swing, Sinatra and more.

What are your own roots?
My roots derive from a rather mixed background. My father is of Vietnamese / Tibetan / Chinese heredity, but grew up in India, before immigrating to Canada in 1967. While my mother’s roots stem from Indo-China, she grew up in Brunei before immigrating to Canada in 1969. Both extended families ultimately settled in Toronto and my parents met and married in the early 1970's. The last name “Hsuen” (now XUAN), pronounced “Schwen,” comes from the Last Emperor of China Henry Pu Yi who ruled using the name Xuantong from 1909 until his forced abdication in 1912. The story was of a tumultuous reign, his forced resignation and eventual attempt to reclaim his title of Emperor under the new puppet state Manchukuo in the 1930's. I am first generation Canadian, born in Toronto in 1975. The first six years were spent in Etobicoke; at the time I lived a sheltered life with my extended family and was taught three dialects of Chinese:Yunnan Dialect, Mandarin, and Hakka. As these were rare dialects, compared to the more common Cantonese, our family was an outcast even within the Chinese communities. This lead to a challenging period for me when I entered primary school in the late 1970's under the Peel Region Board of Education. As ESL and TOEFL were not integrated in schools as they are today, my English skills were behind my classmates. I can remember times when I was shamed, scolded and humiliated in front of the class attempting to express my frustrated feelings in broken English. By the time I came home to my parents in tears, the trauma was so extreme I started blocking any former knowledge of the Chinese languages for good and made it my goal to master the art of the English language. Reading comprehension and grammar were two challenging skill sets during primary school; however, in 1987, I practiced pronunciation and reading skills on tape. The following year, I began a small radio program and that was how my radio career began. 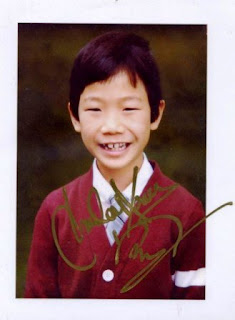 When and why did you first get interested in jazz?
My ear for jazz came threefold by very influential sources. The first, while watching Mister Rogers Neighbourhood on PBS - the program not only taught young children the effective development of childhood psychology vs. cognitive development, but also immersing young children to some of the most sophisticated incidental music provided by pianist Johnny Costa. For over 40 years, Johnny Costa’s music never pandered to its audience but gave a different interpretation to Fred Rogers’ compositions each episode. The music was performed “live to tape” so the room for complex soloing was a wide palate for Costa to explore; especially in the Neighbourhood of Make Believe segments. This also translated to the celesta instrument heavily utilized by Mr. Dressup in Canada on CBC. Both Ernie Coombs and Fred Rogers began at the CBC in 1962 in Butternut Square. The second influence was listening to Old Time Radio shows and watching vintage TV and Films.  The incidental music provided by radio, TV and film were large orchestras commissioned to play the Great American Songbook. Jack Benny, Fred Allen, George Burns and Gracie Allen, Milton Berle, Red Skelton, Jerry Lewis, Bob Hope, Edgar Bergen and Charlie McCarthy, W.C Fields, Abbott and Costello all had large big bands on radio. MGM, Paramount, 20th Century Fox, Warner Bros., Universal, and Disney had composers under contract ensuring the Great American Songbook was licensed through their films as a promotional tool. Finally, the big variety shows and game shows- Carol Burnett Show, Tonight Show Starring Johnny Carson, Dean Martin Show, Jackie Gleason Show and The Price is Right all had big band orchestras of 40+ musicians. All of that gave me an ear for arrangements, showbiz quality and influence in jazz. Finally, it was on the morning of Saturday January 16th, 1988 when I first listened on the radio to a tribute to one of the most influential jazz concerts of all time celebrating, its 50th Anniversary: The Benny Goodman performance at Carnegie Hall from 1938. As a clarinetist myself, this solidified my love for this great art form culminating all the great jazz musicians.

Are they the same reasons you are passionate about the genre today?
Even more so now than ever before…I believe it’s because of the accessibility of music now versus how restricted music availability was when I was a kid. I spent a fortune acquiring music and researching information from outdated books at the library. When the internet exploded around 1995, the world changed and I suddenly found people as obsessed as I was for jazz music. The downside is that 30 years ago, I could speak to people in their 80s who actually recalled events and knew music first hand. However now in 2017, there are very few centenarians who are around to be able to discuss this music. People don’t realize that Elvis Presley is now considered “Easy Listening” as his first big recordings are over 60 years old. So Octogenarians are brought up with Rock and Roll vs. their parent’s generation of Jazz. 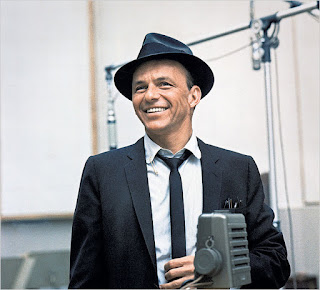 What inspired the radio show?
As mentioned earlier- the radio show began as a tool to be used to perfect my English skills. The music programs I produce are inspired by one broadcaster who I started listening to at the age of 10 on what was then CJRT 91.1 in Toronto. Ted O’Reilly was the host of the Jazz Scene premiering after he graduated Ryerson Polytechnic Institute in 1965. For the next 37 years he graced Toronto airwaves six days a week with a huge variety of Jazz. He also brought some of the greatest jazz legends into my home with his interviews and vast knowledge. His voice cadence is one I admired and in which I emulated; his dulcet tones gave my tube radio a rich tonal quality. To this day his two theme songs are used as themes to my radio programs in tribute to his influence on my radio broadcasting career. I started helping CJRT (now Jazz.FM 91) when I was 11 years old until I left Toronto in 2001, at age 26. When arriving in Halifax, I found the jazz scene limited and I wanted to bring my knowledge of jazz and the Great American Songbook to the Halifax airwaves. That was the start of the Swing Arrangement on CKDU followed by Evening Solitude and Specially Sinatra on Seaside FM 105.9 in 2005. Other radio programs that inspired my own radio shows are Radio Deluxe with John Pizzarelli and the Jonathan Channel with Jonathan Schwartz, which both hail from New York. The two along with Michael Feinstein help preserve what is called “America’s Classical Music.” It is lucky for us that these preservationists continue to ensure the legacy of this music stays intact. The radio show also allows a few obsessions: show and tell, pushing buttons, and technology. As North Americans, we are brought up as children to present our interests at a young age. Show and tell was engrained in us to engage the skill set to speak in front of an audience. The radio show inspires me to show the world the music I love and how important it is in our culture. As kids, we all love to push buttons. A radio broadcaster gets to adjust dials and push button constantly. Finally technology- I am fascinated on audio restoration and giving the best possible representation of this classic music using the best source material. 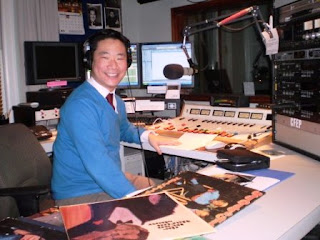 How has it evolved over time?
The radio show has evolved in a number of ways, all having to do with the technology. When I first started radio in 1988 it was cassette tapes, records and, if you had a lot of money, CD's. I would have to lug over 200 CD's to the radio station and play the same albums over and over again due to accessibility. Today with hard drives, online streaming, YouTube and internet speed, a click of a mouse can instantly grant access to play virtually any piece of music ever released. My jazz program now delves into different forms of jazz outside of big band and swing. My Evening Solitude program now focuses on the Great American Songbook of pop vocals, Broadway, jazz and film soundtracks.

What kind of feedback do you get from listeners?
It varied when I first started my programs in Halifax: I received a lot of “Too jazzy, too brassy, too loud…please play more Maritime and Celtic music.” I don’t get much of that anymore. Some of the listeners suffering from dementia and Alzheimer’s tune in and I hear from nurses and relatives that they actually respond to the music I play because it jogs their memories from years ago. I get stopped on the street and they say, “I love your radio show.” About 13 years ago, a listener contacted me and I recognized the name: Bill Zehme. He is the famed authorized biographer to Johnny Carson, Hugh Hefner, Regis Philbin and Frank Sinatra. He asked if I wanted to contribute to the liner notes on Sinatra’s Television DVD set. I am now in the Sinatra canon of released albums with my name inscribed with special thanks. 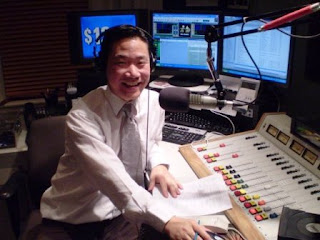 What are your thoughts on the state of jazz in Halifax, and Atlantic Canada?
There were various jazz bars in Halifax when I first arrived in Halifax in 2001. All of them have disappeared. The running joke is that there are four stages to a jazz club: 1. Jazz Club 2. Blues Club 3. Strip Club 4. Insurance Fire. But I think that is indicative of jazz clubs around the world. You go to New York, Toronto, Tokyo and London, save for a few well known very expensive places, there are only bars that have a jazz night once or twice a week. We have such a huge talent pool of jazz musicians in Halifax, including Chris Mitchell, Holly Arsenault, Larry Bjornson, Ray MacNeil, Sylvio Puppo, Mike Cummings, Daniel Matto, Mike Cowie, Gerry Carruthers, Bill Stevenson, Scott MacMillan, Jerry Granelli, George Hebert, Gypsophillia, John Chaisson and many others. However, the venues are far and few between. I joined the Halifax Jazz Festival Board of Directors in 2015 and my contribution is to gain more exposure for our local artists, as well as bring in bigger jazz names to the festival (as well as year round) to Halifax.

What's next on your jazz agenda?
My dream is to have a Jazz East Radio Station with 24 hours of jazz. It would expose listeners to our very own jazz performers, live performances, education and, ultimately, help connect Atlantic Canada to the rest of the world.