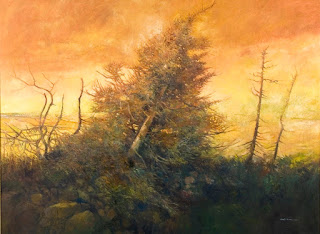 Gerald Squires searched for the spirit or essence of his subjects, revealed through the lens of his artistic creativity. Now, a new exhibit of his work shares his powerful love of Newfoundland and Labrador’s landscape and people. Recently we spoke with curator Caroline Stone about Squires, his legacy, and what attendees can expect at the exhibit.

How did this show come about?
Talks with Gerry about the possibility of a solo exhibition at The Rooms Provincial Art Gallery began about five years ago. The last comprehensive public gallery show about Squires was in 1998, at the Art Gallery of Newfoundland/Art Gallery, Memorial University of Newfoundland, so an updated presentation of his work, scheduled for 2017, was more than timely. Sadly, he fell ill, but he wanted the current exhibition project to continue as planned.

What are your roles and responsibilities there?
I was the guest curator for this exhibition, I formulated the exhibition concept, traced Gerry’s career path and artistic production over nearly six decades, negotiated potential loans to the exhibition, decided its content and layout and wrote exhibition text.

What were the challenges involved?
Gerry was a very prolific artist, and many of his artworks are in private collections - so not easy to locate. However, members of the Squires family, particularly his wife Gail, were of considerable assistance in this. Another challenge was compiling and checking an in-depth curriculum vitae and bibliography drawn from many sources. For this, Gail’s records, and the sleuthing of project assistant Janet Whittaker, were invaluable.

What are the rewards?
It is very satisfying to bring Gerry’s work to the attention of new audiences, and provide those already familiar with various of his images the chance to view them in context, in the original. It was wonderful to share memories of him with his family, friends and collectors of his work.

What can audiences expect to experience?
There are over 130 entries in the exhibition list, dating from the early 1960s to 2015 and ranging from 18-foot paintings through sculptures, drawings, lithographs, ceramics and stained glass to tiny sketches and ephemera. They were chosen to represent his versatility and technical expertise, his connections with his community and, above all, his expression of spirituality through art.

Why is it an important retrospective?
It is over two decades since a Squires exhibition of this scale was presented to the public, and such a project is unlikely to be undertaken again for some years. This is the time to see a wide selection of his work in the original, supported by text, chronological information, a short film interview and various related programming. Also, this summer Pedlar Press has published a substantial book by Stan Dragland and Michael Crummey titled “Gerald Squires”, and Kenneth J. Harvey has produced a documentary film, “I Heard the Birch Tree Whisper in the Night”.

In your own words, how huge was Gerry's contribution to the Canadian cultural canon?
Gerry was one of the senior visual artists of this province, included in shows that travelled to various parts of Canada from the 1970s onwards and recognized through national honours. As such, his work represents a vibrant contribution to the Canadian scene, from its most easterly region.