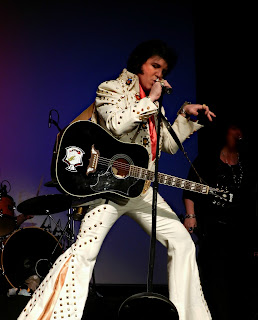 Commemorating the 40th Anniversary of the passing of Elvis Presley, International World-Champion Elvis tribute artist, Thane Dunn and his Cadillac Kings, will perform seven shows throughout the Maritimes over the coming months. Recently we spoke with the King of Kings about his passion and profession.

What are your roots?
I was born in Moncton, New Brunswick. I've lived everywhere from California to Toronto but Moncton always has had a special place in my heart. My musical roots have always been early Rock and Roll and also old Country and Western like Buck Owens and Stonewall Jackson. I’ve always been a huge Jim Morrison fan. He had a lot of similar traits to Elvis.

What first inspired the Elvis tribute?
I always loved the man and I’ve had people tell me I looked like him and in early bands I was in people would say I sounded like him. I had a few months leading up to the decision to do it where it seemed every time I turned on the TV there was Elvis, the radio would be playing Elvis, he was everywhere and I decided to try and do a realistic tribute to Elvis, as if an actor would take on a role trying to duplicate the look and voice mannerisms of that person. I wanted to portray Elvis in a positive light and not the bad joke like most of the Elvis Impersonators I had seen on TV and by all accounts it’s worked.

Are they the same reasons you do it today?
Yes, it’s still a big part of why I do it. I want people to experience a taste of Elvis magic that we offer Elvis fans and those who never got a chance to see him first hand that is done with respect, class and dignity without the cheesiness that people have come to expect from Elvis shows. I also do this to feed my family as our soul source of income. I’ve been blessed with an incredible wife and son Charlie and at the end of the day it’s Elvis fans that pay our bills.

What are the challenges of the gig?
Elvis was the world’s Greatest Entertainer with the looks of a Greek god. His voice was incredible and he oozed charisma from every pore so there’s a challenge if I ever heard of one..lol! I exercise everyday and follow a strict diet and I vocalize each day for around an hour and watch Elvis. I have taken voice lessons, opera lessons and now have Bill Baize, who performed with Elvis, giving me tips and pointers which has gone a long way.

What have been some career highlights?
Career highlights would be winning the World’s Largest Elvis contest in 2009 and the World’s largest International Elvis Gospel competition in 2012 - my Father and I always loved gospel music. Touring with world-famous rock photographer, John Rowlands, who was hired by RCA and shot 48 Elvis concerts has said, “I was a split second away from Elvis Presley” - that was really cool. Being endorsed by the Hank Snow Museum was amazing. Hank co-managed Elvis for 6 months and introduced Elvis to the Colonel but the neatest thing is actually having Bill Baize who performed with Elvis from 1971 to 76 and has been called one of the finest tenor singers of the 20th Century not only endorse my show but actually become a part of it. He loves the show and we love him and I have learned so much from him. Having a man who toured with Elvis and sang gospel music around the piano late at night in Elvis suite say that I’m the "closest thing

Who is your core audience?
We really don’t have a core audience. I initially thought it would be an older demographic, and it might have been, but they started bringing their kids, grandkids and now I have entire families that come out to see us. Elvis is still a phenomenon all these years later and we now get a lot of kids, teenagers, etc. I think people initially either come to the show because their big Elvis fans or due to curiosity and thankfully we've been able to deliver keep them coming back. 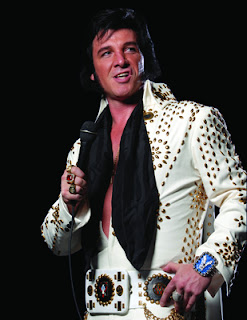 What is their response like at shows?
No one will ever be Elvis but there have been many times over the years I’ve gotten a pretty good taste of what he would have experienced onstage. I’ve had lots of people who saw Elvis say that it was like seeing him again…people trying to rip your clothes off, women fighting over scarves, women trying to grab your jewelry or get a kiss. I’ve seen pandemonium in a good way and at the same time I’ve seen 2000 people all singing the same song at the same time and have never experience so much love in the room. Elvis fans are the best people you could ever meet and you can basically feel the love in the room and the more I can create the fantasy of Elvis onstage the crazier it gets.

From your perspective, do younger people today understand and appreciate Elvis' contributions to music and culture?
I think the younger generation definitely knows who Elvis is and some love him just the way I do. I think Elvis is like Grandma’s apple pie recipe, something so good that it gets passed down to the next generation as I see that over and over but as far as kids understanding Elvis contributions to music and culture I think it comes and goes like Rockabilly, it’s a new trend for awhile and then backs off for a bit but I think Elvis is still so popular today because quality stands the test of time and he will live forever in music and movies. I think kids find out things on their own when it comes to music and what they like. Elvis had the power to entice you just from a picture on an album cover or most definitely when you hear his amazing voice you were drawn to him.

What are your plans for the rest of 2017, and into 2018?
We will be touring around the Maritimes and then plan to hit Quebec and possibly Maine in the fall. We have a few dates planned in NFLD for January and then off to Toronto and then a tour throughout Ontario .We leave in March on our first ever Elvis Dream Cruise. My band, Bill Baize and I are headed to the Caribbean onboard the Allure of the Sea for 7 nights. We are also working on a tour of the UK and of Costa Rica. Other than that I’m currently working on a project where my focus is motivational speaking. I have an interesting story that will help people to believe in themselves and follow there dreams that I want to share with others.