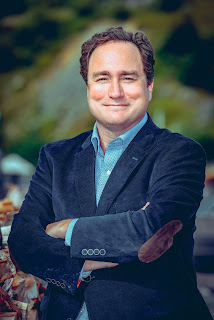 Comedian, author, and star of CBC Television’s hit series This Hour Has 22 Minutes, Mark Critch opens up to Arts East about his past, his path, and his home-province pride.

What are your family's roots?
My father's family lived in Gaskiers, St Mary's Bay. My great-grandfather was a fisherman, as was his son Patrick. My mother's people were Bells and they had a farm. Her grandmother was an O'Connell from Waterford, Ireland.

When and why did you get into comedy and broadcasting?
I first rented a theatre when I was 15 to do a sketch comedy show. I always wanted to write and perform my own material. From there I went on to become an actor, but the comedy took on a life of its own. I eventually landed a gig writing for 22 Minutes. From there, I ended up on air.

Are they the same reasons that you do it today?
Absolutely. I'm fortunate to make a living doing what I love, but if I wasn't working as much, I'd still be doing it. I love writing something and then performing it fresh the same night. It's the best.

What are the challenges of the profession?
There can be an uncertainty as to where the next cheque is coming from. That, and time away from family, are the two things that can make it stressful. But doing what you love for a living adds years to your life.

What are the rewards?
Meeting people from across the country and beyond that I would never normally meet. I often meet new Canadians who watch 22 Minutes when they first come to the country to get a grasp on what it means to be Canadian. There's nothing as fulfilling as hearing a stranger quote back something that I have written. Sometimes when I am writing, I wonder if anyone is ever going to hear what I am writing. When it connects with someone it makes it all worthwhile.

How have you evolved as a comedian and broadcaster over the years?
It takes time to find your own comedic voice and to have the confidence that you need to make honest decisions when performing. When I first started on the show, it was like borrowing a car and not wanting to scratch it. You drive slower. You don't eat in the car. Now I'm not afraid to take the back roads or get some coffee on the seat.

What makes for good comedy?
Honesty. When a comedian says something that you are thinking but can't say yourself, it makes for a great, uncontrollable reaction. The best reaction you can get is when a couple in the crowd nudges one another and nods a "that's you."

What does it mean to be a Newfoundlander today?
Newfoundlanders and Labradorians are no longer looked at as a cute, goofy province. We are now known for our intellectuals, and we have some of the greatest restaurants in the country. We might be heading into some dark days though; we had a huge boom with the oil, but the price of oil had dropped and we got caught with a lot on our credit card. Our fisheries and oil industries are in trouble. That said, we need to be up to the challenge of pushing past the negativity and sailing through this storm. We have done it before and we will do it now. To be a Newfoundlander today means what it always has; hard working, generous, proud, and tough enough to make it through the storm and to keep believing in the reasons to fight your way through.

Why has Newfoundland's cultural sector exploded in recent years?
We have an amazing cultural history. The path was cut by years ago by Codco, the Wonderful Grand Band, Rising Tide Theatre, and more. Today, we have the best music - Ron Hynes, Great Big Sea, Jim Payne, Amelia Curran, and Hey Rosetta. We have the best comedians - Shaun Majumder, Mary Walsh, and Rick Mercer. We have the best authors - Michael Crummey, Lisa Moore, and Wayne Johnson. And our theatrical scene is brilliant, with the likes of Gordon Pinsent and Allan Hawco. Now, with Come From Away on Broadway, our story and voice is being interpreted on the global stage. There was a time when we may have asked ourselves are we as good as the rest of Canada? Now we know that we aren't - we are better.