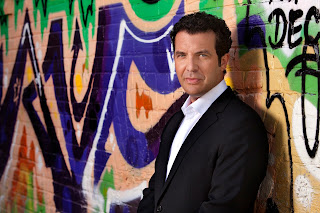 Rick Mercer is one of the most familiar faces in Canada. Born and bred in St. John’s, Newfoundland, he currently hosts of one the country’s most popular weekly television programs, The Rick Mercer Report, now going into its 15th season. Recently, Celtic Life International spoke with the multi award-winning comedian, broadcaster, author and philanthropist about his past, and his unwavering passion for both his profession and his home province.

What are your family's roots?
We are mostly English and some Irish. On both sides of my family we have been clinging to the island of Newfoundland for hundreds of years. Where we actually came from is a bit of a mystery.

When and why did you get into comedy and broadcasting?
I guess you could say I started in the comedy business in high school. I was part of a comedy troupe - we performed in bars and did late night cabaret style shows. Sometimes we would play with a rock band. After high school I dedicated myself to it full time. Gradually I realized I didn’t want to do standard comedy, but comedy
which concerned current events. I liked comedy that had an opinion. Broadcasting was always the dream. I am not one of those people who came from the theatre or the comedy world, works in TV, and wishes they were back on the boards performing live every night. Being on the CBC is where I always wanted to be.

Are they the same reasons you do it today?
Absolutely - I have always had two great interests; politics and comedy. The fact that I have been able to meld the two, and make a good living from it, is something I am very grateful for. I love performing on TV and on stage. I love making politics or current events accessible and interesting.

What are the challenges of the profession?
I think for some people being constantly on the road would be a real problem or challenge. For some reason I have no problem with that.

How have you evolved as an artist over time?
When I started I was the classic “angry young man” – and I was good at it too. But the advantage of being an angry young man is that everything is cut and dried, black and white. As I get older things become a sea of grey. I spend a lot more time looking at both sides - or maybe twelve sides - of every argument. Something else that I didn’t see coming was that The Mercer Report has become very much a family experience. I love that families watch the show, and that kids enjoy the program with their parents. There isn’t very much of that going on in broadcasting now, with everyone huddled in their own corners with their tablets.

In your opinion, why does the show remain so popular?
The show is very much a celebration of Canada, and I am thrilled to be part of that. I think Canadian content is more important now than ever. Canadians respond to the show because they know every week I am going to be somewhere in the country, and chances are it’s a place they may not be that familiar with. I get great personal satisfaction introducing Canadians to Labrador or Cape Breton or the North. I love going off the beaten path, and I know that viewers do as well.

What does it mean to be a Newfoundlander today?
Well I would have to say what it has meant for a very long time; it means being from, or living in, the greatest place on earth. Can you tell I am biased? Like every other time in Newfoundland and Labrador’s history, this is a very challenging time for the province. There are huge challenges on the economic front; our demographics are struggling, and far too many people - myself included - packed up and went away to work. But nothing about Newfoundland and Labrador has ever been easy.

From your perspective, why has the province’s cultural sector exploded in recent years?
It’s a great product. Newfoundland and Labrador has an incredible cultural heritage. We are proud of our musicians and our writers. We have so many tremendous creators. One of the very bright spots in Newfoundland is the explosion in tourism, which I believe is driven in many ways by our cultural sector. However, it is one of the great ironies that we have a long tradition of politicians speaking very passionately about the importance of our cultural sector, and at the same time we have a long tradition of not putting our money where our mouths are. At both the municipal and provincial levels, we can surely improve on funding for the arts and cultural sector.