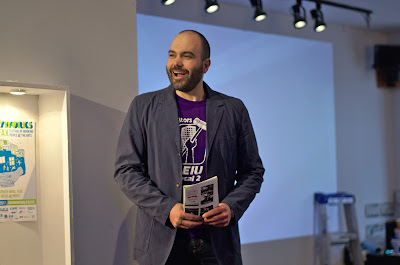 May 1st is marked throughout the world as International Workers’ Day, or May Day. Recently we spoke with Sébastien Labelle, artistic director of the Mayworks Halifax Festival, about what attendees can expect at this year’s celebrations.

When and why did you first get involved with the festival?
I first became involved as a featured artist in 2012. I was a member of Puppets Et Cetera!, a street theatre group with whom I presented a show about food production through the use of migrant labour. I presented another show with Puppets Et Cetera! in 2013. This time about the history of May Day. In that same year, I joined the volunteer organizing committee that produced the festival through the Halifax-Dartmouth & District Labour Council. In 2014, I took the lead as volunteer organizer of the festival, and in 2016, following the incorporation of the festival as a non-profit, I was hired as the Festival Director. I became involved initially as a performer and artist interested in politically charged art, and also as a trade unionist. After performing once in the festival it became very apparent to me the importance of a festival that provided a venue for artists to present art that was politically engaging and challenging. There are few opportunities for artists to be politically free of corporate sponsorship interests and where they can also be paid for presenting this kind of work. At Mayworks Halifax, the inclusion of politically charged work is encouraged as part of an artist's career development rather than as part of an activist side-project often provided for free or with little support.

Are they the same reasons you do it today?
Absolutely.

What are the challenges involved?
As with any arts organization, there are many changes - available funding support being one of the primary ones. The arts funding climate in Nova Scotia is not favourable, especially when it comes to operating support. Provincial government grants toward operating support have been frozen for over a decade, making it very difficult for arts organizations established since then to grow and remain sustainable for very long. Generally speaking, this has encouraged a heavy dependence on corporate sponsorships within the arts sector. However, we make a point of curbing that trend as much as possible and instead rely on a strong network of partnerships with unions and labour organizations across the province.

What are the rewards?
Fostering a politicized arts scene where challenging the status quo is the new norm and also fostering a culture of solidarity through our audiences. Inevitably, this leads to the curation of artwork that originates from a very diverse range of voices and communities, which, in itself, is very exciting and enlightening. 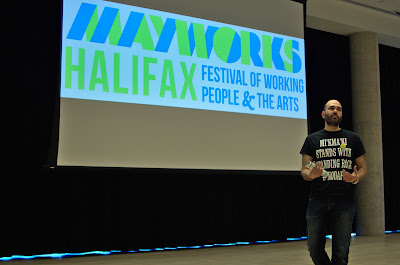 What is the festival's history and mandate?
May 1st is marked throughout the world as International Workers’ Day, or May Day. A day when the workers of the world take to the streets in every major city around the globe demanding justice, fairness and dignity for all. In North America, May Day has not been as prominent as it is in other parts of the world, but it is still celebrated in most major cities with a variety of political and community actions.  However, May Day isn’t simply a celebration of labour. It is a rallying call against our current economic system, a public declaration that “Capitalism Isn’t Working For Workers,” and an affirmation that a better world is possible. One of the ways various labour councils and unions mark May Day is through the Mayworks Festival. Mayworks was originally conceived in 1986 by the Toronto and York District Labour Council and the idea has since spread to many cities across the country. The goal behind Mayworks is to bring workers and artists together and to use art to explore themes of justice, solidarity and liberation. Art has always been an important way of expressing political statements and Mayworks continues in a long tradition of building bonds of solidarity between artists and labour organizations. The first annual Mayworks Halifax festival took place in 2009 thanks to the organizing efforts of volunteer union delegates to the Halifax-Dartmouth & District Labour Council. Our festival has since grown exponentially from year to year and has now become Nova Scotia’s largest social justice themed cultural event. Annually, our festival attracts over a thousand diverse audience members who take interest in issues of social, economic and environmental justice. Moreover, the multi-disciplinary nature of the festival allows us to draw followers from multiple arts communities including theatre, dance, visual art, film and music. What sets Mayworks Halifax apart from other local festivals is its close ties to the Nova Scotia labour movement and its ability to bring together the labour movement and the arts community in cultural projects that encourage the use of art toward positive social change. In its programming, our festival seeks out partnerships with cooperatives and artist-run centres and places a particular focus in supporting local artists. Furthermore, our programming attempts to redress the under-representation of certain communities or certain issues in artistic venues. We don’t shy away from highly marginalized issues such as the examination of working conditions in the sex industry, or from contentious programming such as bringing to stage former prison inmates to reflect on their lives as a means to reconcile with their communities. Mayworks Halifax celebrates the history of working people in Nova Scotia. It pays homage to famous human endeavours such as the difficult strikes lead by miners in Cape Breton or the inspiring cooperative movement born out of Antigonish. But, it also challenges narrow conceptions of working class culture and depicts it as complex and diverse, and yet containing common experiences, values and desires for fairness and justice. As such, our mission is to draw correlations between social issues in order to generate empathy and cooperation between groups and organizations in an effort to build a better society for ourselves.

How has it evolved since last year?
We've received more submissions than ever for this year's festival, leading to a very interesting curating process. As a whole, I would say our 2018 program is our strongest yet featuring some well-established artists in a number of different disciplines alongside some very promising emerging talent.

What can attendees expect at this year's festival?
For the first time this year, we are providing sign language interpreters for some of our events that rely on speech for communication - i.e. spoken word and theatre events. Economic accessibility has always been at the forefront of our considerations by making sure that our events are either free or offered at much lower admission costs than the norm. However, making our festival more accessible to those living with various physical disabilities has been a growing consideration of ours. We make a point of making sure our venues are wheelchair accessible, for example. And now, we're inviting deaf and hard of hearing Nova Scotians to join us by providing services that will allow them to enjoy our festival and appreciate the work of our featured artists.

What are the event's future plans?
2019 will mark our 10th anniversary! So, we're already thinking about how to celebrate this landmark year for us. Stay tuned!