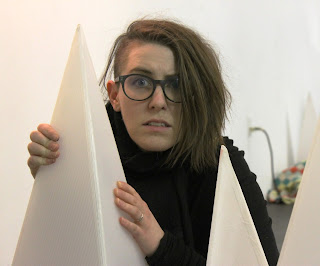 From April 11-15, The Villain’s Theatre of Halifax presents The Blazing World - an imaginative and poetic sci-fi odyssey about one scientist’s quest to save a dying planet - at Neptune Theatre's Scotiabank Stage. Recently we spoke with playwright Colleen MacIsaac about both her profession and the production.

When and why did you first get involved with theater and the performing arts?
I began my theatrical career when I was seven, playing a skunk in an elementary school masterpiece called “The Animal’s Christmas”. From there I moved on to notable roles such as “assembly MC” and “Spots the Leopard”. When I was in grade 5 I had my big break - booking the lead role of “Witch” in a class Halloween play, though the production was eventually cancelled after I had learned all my lines because no one else felt like doing it. After some improv classes and theatre camps where I achieved my crowning and bloody glory of being so overenthusiastic about my blocking that I caused a girl’s braces to slice through her lip in front of an audience, I realized that I loved the theatre and creating these beautiful and brief worlds in a room full of people. After attending an arts high school filled with unsuccessful auditions, I studied animation, but after moving to Halifax and working in relative isolation I realized that I missed working with a team, and ended up diving deep back into the world of theatre.

Are they the same reasons you do it today?
More or less, yeah!

What are the challenges involved?
As someone who often works as a producer as well as a performer, the challenges range from the smallest artistic choices to the largest logistical questions, and vice versa. Making theatre on small budgets, constantly juggling multiple jobs and scrambling for funding and space and resources can be exhausting - and the artistic side is invariably filled with insecurity, self-doubt, and existential dread. But it’s great!

What are the rewards?
I cannot imagine doing anything else with my life. I love it. I am constantly invigorated by the collaborative process of theatre, and in a time where so much of what we do is based on remote communication, the beauty of being in the same room with a group of people, telling a story using methods and tools new and ancient, is magical. I have personally been changed and transported by theatre (both as an audience member as well as a part of a creative team), and I am always so honoured whenever I have the privilege to be in the room.

Is your creative process more 'inspirational' or 'perspirational'?
Both, I guess! This particular piece is my first full-length play in a number of years, and boy howdy do I find writing really, really hard. Sometimes I can pull an all-nighter and write all night and come up with something workable, but more often it’s me staring off into the distance in front of a keyboard. Or checking twitter.

What makes for good theater?
Work that is honest.

What inspired this particular production?
There’s a lot thrown into the mix of this show. It began, of course, with Margaret Cavendish’s amazing novella from 1666. There’s a lot of it woven in in sneaky little ways, even though you could see the show and have no idea it was based on something from 400 years ago. There’s many different influences thrown into the mix, and specific pieces that I nod to because of the place they play in the genre (The Wizard of Oz, Alice in Wonderland, and Goodnight Desdemona, Good Morning Juliet, for example). The original story by Cavendish is about a woman explaining how she views the world and how she feels it could best be improved - my version is about someone viewing the world with a good deal more uncertainty about how to fix it all.

What can audiences expect during the run?
It’s a pretty wild ride. The design team is absolutely incredible. The images and sounds that we’ve seen in the process so far have been really fun. Expect the unexpected, perhaps? This is a pretty big departure for The Villain’s Theatre - our mandate is to create works inspired by classical texts, but this is the furthest exploration that we have undertaken in the history of the company.

What are your thoughts on the current state of theater in Halifax and Atlantic Canada?
I think there’s a whole ton of amazing artists working in Halifax and Atlantic Canada right now. I hope that more audiences are able to access the work that is being created, and that the funding and opportunities here can increase so that less people have to move out of province to find work. It’s so heartening to see companies like Neptune providing opportunities like the Open Spaces program (which we were awarded and allowed us to access the Neptune Scotiabank Stage Theatre), as well as their upcoming Chrysalis programs, and to see amazing organizations like the Bus Stop Theatre Cooperative fighting so hard to keep providing accessible opportunities for so many emerging artists.

What's next on your creative agenda?
We’re bringing the show to Saint John Theatre Company in June, which will be really neat to adapt to a very different space. I’d love to see it have a bit of a touring life. Aside from that, I’ll be doing some writing as part of the Bus Stop Theatre’s Playwright’s Unit, and I’m going to be involved in two shows in the Fringe this year which I’m really excited about. And The Villain’s Theatre has a slate of new projects coming up this year which we’ll announce at our spring soirée/season launch on May 5. Check our website for more details!