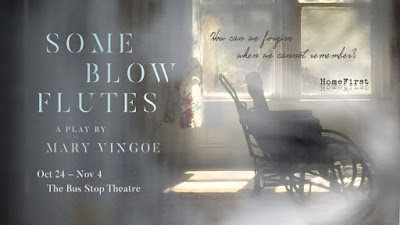 Until November 4, HomeFirst Theatre in Halifax presents Some Blow Flutes, a new play that deals with the effects of memory loss - both brought on by illness and self-induced - that asks audiences, how can we forgive when we cannot remember? Recently we caught up with director Mary Vingoe.

What are your own roots?
I grew up n Halifax and studied theatre at Dalhousie. Then went to Toronto to do a Masters at U of T and stayed to be a part of the new wave of Canadian theatre that was happening in the late 70s and 80s. I acted for about 7 years then and co-founded Nightwood Theatre with Maureen White, Kim Renders and Cynthis Grant in 1979. I took over as AD of Nightwood Theatre in 1985. I also continued to work in Nova Scotia with Mulgrave Rd and co-founding Ship’s Company with Michael Fuller. In 1990 my husband Paul Cram and I moved home to Nova Scotia. Gay Hauser, Wendy Lill and I founded Eastern Front Theatre in 1993. I left in 2002 to become founding Artistic Director of The Magnetic North Theatre Festival at Canada’s National Arts Centre in 2001.
When & why did you first get involved with theater?
I got the lead in a high school production of Feydeau’s Please Don’t Walk Around in the Nude - it changed my life.
Are they the same reasons you continue to be involved?
After some 40 years of acting, directing, producing and playwriting, it is my community and my life.
What are the challenges of the vocation?
Continual financial instability.
What are the rewards?
A hugely rewarding sense of purpose, and terrific friends bonded by the intensity of artistic friendship .
How and why did you put this production together?
I started writing Some Blow Flutes two years ago. Originally it was to be  a play about running for office, which I did in 2013, however that all changed.
What can audiences expect during the run?
It is a love story with lots of laughs, but also has intense moments of sadness and, ultimately and hopefully, redemption.
What are your thoughts on the state of theater in Halifax & Atlantic Canada?
There are wonderful things happening here, excellent actors and creators. We have a huge challenge with infrastructure, however. We have lost three smaller spaces in the last few years. Developers are eating up all the affordable spaces and the Province and City have not kept up with the need for cultural spaces.
What’s next on your creative agenda?
I have been asked to direct Chekhov’s The Cherry Orchard at Sir Wilfred Grenfell in Newfoundland. It is a play that I have wanted to direct since I played Dunyasha the maid in 1977 at Hart House at U of T...it will be an interesting journey!