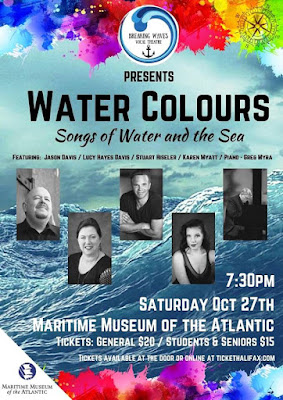 Several of Atlantic Canada’s finest voices will make beautiful music together this coming Saturday night at the Martime Museum of the Atlantic in Halifax for an engaging performance called Water Colours. Recently we spoke with Jason Davis, leader of the group known at Breaking Waves, about what audiences can expect to experience.

What are you own roots?
I was born and raised in Dartmouth. I came from a musical family and early on I was encouraged to explore music and theatre. I formally studied voice and theatre at Dalhousie University and then went on to complete a graduate degree in Opera with a minor in stage direction at the Hartt School of Performing Arts in Hartford CT. After completing school I began an active and successful Operatic career throughout the US and Canada while also continuing studies with some of the best vocal pedagogues and coaches in New York. My wife Lucy Hayes Davis had the opportunity to join the faculty at Dalhousie University in their music and theatre departments so we moved our family back to Halifax. Since then I've been actively singing throughout the Maritimes and Canada and also teaching and directing in Halifax. Lucy and I met in Halifax in 1992 so its an amazing full circle for us to be able to call this city home and raise our family here. The arts scene in Halifax for a city this size is wonderfully diverse and vibrant and I'm excited to start this new vocal theatre company in such a creative and supportive community.

When & why did you first get involved with music?
My mother Sharon Davis was a huge influence in my exposure to the arts. She was a very popular public school music teacher in the Dartmouth School system back in the 70s, 80s and early 90s. She encouraged me to explore music, theatre and dance. It was a huge part of our family and the first time I stepped on stage in a full role in junior high I knew this is what I would be doing for the rest of my life.

Are they the same reasons you continue to be involved?
My role and priorities in the arts, singing and theatre has certainly shifted over the years. When I first entered the business I was very focused on my singular career as a performer and artist. Over the years my focus has widened to include a love of teaching, coaching and directing. For the past 11 years my wife Lucy and I have been very active behind the scenes acting as vocal teachers and coaches for many professional and amateur singers and actors throughout Halifax and the Maritimes and we've also developed and grown our own educational youth Music Theatre program called the Broadway Company Players which has been selling out every single one of their performances since we began offering main stage productions back in 2016.

What are the challenges of the vocation?
When I was actively pursuing my Operatic career it was constant travel and constant studying because I was always preparing the next role which could be in Italian, French, German or even Russian. It can be a real grind and it often took me away from family and loved ones. When you’re an artist you essentially work for yourself and as I’m sure it is for anyone that owns their own business if you don’t work you don’t pay bills.

What are the rewards?
I get to connect and communicate with amazing people from all walks of life on an almost daily basis. I get to set my own schedule, spend time with my family and friends and share my voice and perspective on life and the human experience as both an artist, performer, teacher and director. I have no complaints :)

When and how did this group come together?
Over the years a number of groups in larger cities have been springing up to fill the niche of artist driven vocal theatre companies. They are producing concerts and productions that are received as popular, exciting and artistically relevant in very unconventional spaces. Companies like ‘Against the Grain’ in Toronto and ‘Opera Up Close’ in London, England are certainly influences. In early 2017 I decided to form the Breaking Waves Vocal Theatre collective and invite amazing local artists like Stuart Hiseler, Karen Myatt, Lucy Hayes Davis and accompanist Greg Myra to join me. We all carry deep roots to Halifax and the Maritimes but we’ve also all traveled abroad to study, train and develop as artists and now we are bringing together our combined experiences, skills and talents to launch Breaking Waves. Our mandate is to produce raw, bold re-interpretations of dramatic vocal repertoire in non-traditional spaces with reduced accompaniment, to focus on the full force and intimacy dramatic vocal theatre allows us to share between artists and audiences. The result provides innovative staged, un-intimidating, affordable and crucially high quality vocal theatre for everyone. Breaking Waves is a brand new vocal theatre collective. Our debut performance takes place this October 27th at 7:30pm at the Maritime Museum of the Atlantic. This will be the first of a number of concerts we plan to announce over the next year and we intend to transition from concerts into fully mounted productions. We don’t plan to limit ourselves to a particular vocal genre so over the course of our season you could see productions that feature opera, music theatre, contemporary, jazz, r&b, lieder or art song and in some cases like our upcoming concert ~Water colours~ you might hear them all in the same evening.

What can audiences expect with the 'Water Colours' show?
Water Colours’ is an intimate exploration of the imagery and poetry of Water and the Sea through the multi vocal genres of Opera, Music Theatre, Contemporary, Jazz, Lieder and Art Song. In one evening you’ll hear our interpretations of music giants like Stephen Sondheim, Bob Marley, Kurt Weill, Edward Elgar and Stan Rogers just to name a few.

What are your thoughts on the state of vocal theater in Halifax & Atlantic Canada?
Halifax has a lot of depth in its music and theatrical communities. There are a number of professional and independent theatre companies who currently offer music theatre productions within their current seasons, opera companies and accompanying festivals, and a number of existing concert series. The niche we plan to fill is that of a professional vocal theatre company. We are going to mount concerts and fully staged productions in non conventional spaces like local bars, historical buildings or even public parks. Our performances will span across countless vocal genres as we consistently strive to push the limits and artistic expectations of both traditional and contemporary works and we want to bring that experience directly to the people of Halifax.