Ami McKay & The Power of Story 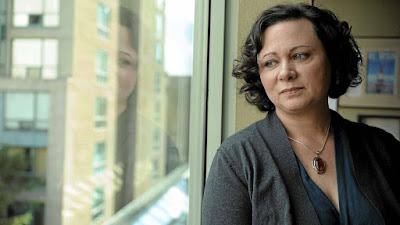 Atlantic Canadian author Ami McKay has been at the forefront of Atlantic Canada’s literary scene for well over a decade. Her novels - inspiring tales of strong women through history - have empowered readers to own their stories, and to celebrate the subtle moments of magic that life has to offer - “They are there,” she promises, “you just need to look for them.” Recently we spoke with Mckay about her journey into storytelling, the television adaptation of her debut novel The Birth House, and the upcoming release of her genetic memoir, The Daughter of Family G.

What is your heritage?
I grew up in Indiana. Both of my parents were born in the United States. My mom is a mix of German and Scottish, which is my Celtic connection. Her father was Scottish, her maiden name was Mackintosh, spelled M-A-C-K - just to make that clear! Although he has passed, my grandfather would never forgive me if I didn’t emphasis that subtle difference. My father’s family were from Germany.

Tell us about your move to Nova Scotia.
I moved to Canada in 2000, and I am now a Canadian. My husband and I met in Toronto, but he went to school at Acadia. When we started to date, and I saw Nova Scotia for the first time, I knew that this was the place we wanted to be. This was home. A big part of it was the people. People say that Nova Scotians are friendly, and it’s true! People look out for each other here, and they care for each other. They are never too busy to sit at the kitchen table for a cup of tea and share stories. That was a very important thing for me as I moved forward in my life. Something I knew I wanted to share with my children, when I had children. We have since made a family here.

There is an incredible mosaic of storytellers here on the East Coast.
Absolutely! I mean, Alistair McLeod alone. Wow! I was very fortunate to meet him early on, right after The Birth House was published. He had been teaching in Windsor, Ontario, but then spending the summers in Cape Breton. He was just so lovely to me, and so kind.

What first inspired you to become a storyteller?
As a kid my two passions were music and writing. For me, writing was kind of a secret. I was very active with musical theatre and orchestras - which eventually led to me majoring in music in university - but the writing was always my outlet on the side, just to do for myself. Even after I got married and we had moved out to Scot’s Bay, I was still doing a lot of writing for myself. Ian, my husband, who is an English major, would read them. He was very encouraging and told me I should consider submitting them somewhere. But I said no, absolutely not. Along the way, though, a few stories did get published, simply because he gave me a nudge. 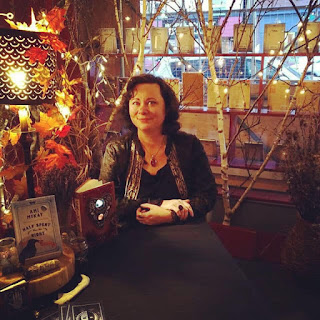 When did The Birth House first come about?
The real breakthrough moment for me in writing was when I attended a CBC workshop about writing a documentary for radio. At the time, a producer there named Dick Miller - he has since retired - was looking for freelancers and was willing to train people on the ins and outs of radio work. These were long-form radio pieces, anywhere from 15 minutes to 45 minutes in length. It was really interesting, and I ended up teaming up with him on numerous occasions. One of those occasions dealt with the history of my own house - after moving in I had discovered that it had been the local midwives house. So, even before I started writing the novel, The Birth House, I did a radio documentary on it. I went around and interviewed women in the community who could remember a sibling who had been born there or who perhaps remembered the midwives that had lived here. It was amazing to collect these histories - not just of the house, but the entire community - and to have all these women’s voices captured in time. I then paired that with a present-day midwife who was practicing in Nova Scotia at the time.

You must be thrilled to see the novel being adapted for TV.
I am so lucky to have people who are interested in what I do and who are are willing to see where something like this can go. It hasn’t been an overnight success; The Birth House is now 13 years old – that’s adolescent in book years! There have been other times that it has been optioned, but nothing ever came of those opportunities - it just wasn’t the right time. Then, last year, I was approached by Elizabeth Scofield, a wonderful series producer from Omnifilm out in British Columbia. We spent an hour on the phone the first time we spoke. She told me she had loved the book for so long and that she was trying to find a way to make a TV adaptation happen. Her vision, and the team she has pulled together, are wonderful. The co-writing team is Sherry White, who was the screenplay for the film Maudie, and Cary MacDonald, who is a writer from Newfoundland and has written for a number of shows including Frontier and Republic of Doyle. In fact, the entire team is made up of women, which is amazing. It just feels like the right time to share this story about strong women in Nova Scotia who are trying to make a difference, all the while honoring the traditions of their past. I have been collaborating with them every step of the way. Recently they came out to visit, and we did a three-day, intensive retreat at the Ross Creek Centre for the Arts, and also here at the Birth House. We sat around the table, had many cups of tea, and discussed which stories are important and what parts of the Birth House still resonate today. It felt like being amongst old friends. I am very excited about it.

Tell us about the new book, Daughter of Family G: A Memoir of Cancer Genes, Love and Fate.
The book is in three threads: the past or before I was born, my memories growing up, and then real time, during the year I wrote it. I figured if I wanted to write this story, I wanted to take the readers with me on a journey. The threads are alternating chapters instead of chronological. Funnily enough, the memoir also came from a documentary I worked on with Dick Miller. It was about my journey getting genetic tests done for Lynch Syndrome. I originally hadn’t been interested in writing non-fiction, a memoir. I didn’t know if I had it in me to write about myself. It felt like a very vulnerable place. With fiction, while it is still a lot of hard work, you aren’t exposing yourself quite as much. 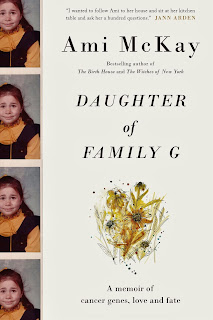 What gave you the nudge?
I spoke with my editor, Anne Collins, about the idea a few years ago after giving a reading at a big cancer fundraising event in Toronto called Read for the Cure. I told her the story about my great, great aunt Pauline, who was dressmaker in Michigan in 1895. She had confessed to a pathologist that she knew she was going to die young and she knew how she was going to die. She explained that many people in her family had died from cancer. Cancer was a very taboo word at that point, so he was shocked that she had not only made this confession to him, but also spoke about all this illness in her family. As he was very interested in this sort of thing he decided that he wanted to work with her. The research that happened on that day would actually alter the course of medicine into the 21st century. When I told the story that night, I was simply talking about the power of story. How something someone once said in a single moment could lead to one of the biggest genetic breakthroughs in history. That story has also been charted over time by many big scientific papers and medical journals, except that she is only referred to as “The Seamstress” in those. Anne - who has been so incredibly supportive through all of this - said that I might consider publishing it, though initially I said no. As I mentioned, I just felt like that was part of my life that I didn’t want to explore. But then I turned 49, and I realized that I was going to be 50 soon. A lot of those people in my family history - and a lot of people that I am very close to - had experienced cancer by the time they were 50. So, I figured it was time to move on it. Between 49 and 50 - I gave myself one year - I was going to write the thing. My editor kept reminding me how important it was. Lynch syndrome is just as prevalent as the BRCA-1 and BRCA-2, which a lot of people know about in association with breast cancer. One out of every 279 people have Lynch Syndrome, but only 5 per cent know it. From that point of view, my fear of sharing my personal stuff went out the window.

What was the most challenging part of the project, going from fiction to nonfiction?
I have a historical fiction voice when writing. It is not my own voice, the voice I use when I am talking to you on the phone or speaking with a loved one. I had to find a voice that could be my voice in this specific text, which was a bit challenging. However it was also very liberating. I hadn’t expected that. I figured I would need to cover things in a very scientific way, trying to dot all Is and cross all the Ts, but then I finally realized that it was me telling someone a story, one on one - me and the reader. I realized that a voice of honesty and openness was the voice that I wanted. I do hope that that comes across for the reader.

What was your favorite part of the process?
Because I have lost many people I love to cancer, I got to meet them again on the page and be with them again for a little while as I was working on the memoir. That was really special. It was sort of unexpected that it would happen that way. I also have two sons, and I felt that this was something I wrote for them, about their heritage and about their ancestors.

What has the reception been like so far?
I have had a handful of people who I really admire agree to read early versions. Beth Powning, who is a wonderful writer from New Brunswick and who has written both historical fiction and a memoir, said some really beautiful things about the book. Jann Arden also really wanted to read it and she wrote this wonderful blurb for it and has been very gracious and supportive.

What’s next on your agenda?
I have a couple of novels that I am supposed to write. I started working on one, but it is very early in the process, so I can’t really say much about it. I am excited to return to fiction and see where that takes me. I have also written a few plays in the past for Two Planks and a Passion Theatre out in Ross Creek, so there is something in the works with them.