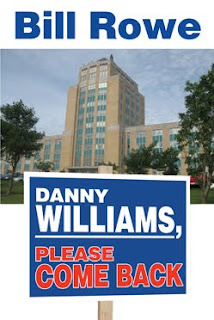 Born in Newfoundland, Bill Rowe graduated in English from Memorial University and attended Oxford University as a Rhodes Scholar, obtaining an Honours MA in law. Elected five times to the House of Assembly, Rowe served as a minister in the Government of Newfoundland and Labrador, and as leader of the Official Opposition. He practised law in St. John’s for many years, and has been a long-time public affairs commentator, appearing regularly on national and local television, as well as hosting a daily radio call-in show on VOCM and writing weekly newspaper columns. Rowe has written four books: Clapp’s Rock, The Temptation of Victor Galanti, Danny Williams: The War With Ottawa, and his latest effort, Danny Williams, Please Come Back. AE recently spoke with the outspoken author about his new work.

AE: What inspired you to write this book?
BR: The book consists of commentaries I wrote from 2005 to 2007 mainly in the St. John’s Telegram and the Corner Brook Western Star, right in the middle of Danny Williams’ heyday as premier of Newfoundland and Labrador. I was inspired to write them after spending time in Ottawa as Premier Williams’ provincial representative in the nation’s capital. Several months as a provincial bureaucrat dealing with Federal bureaucrats filled me to the bursting point with the need to speak out loud and clear on various public issues.

AE: Did the work come together quickly or did you really need to plug away at it?
BR: I plugged away at it every week for two or three years and then there was lots of editing to bring the commentaries into a contemporary context. My book last year, Danny Williams: the War with Ottawa, by contrast, was written in more of a “white heat” as a continuous narrative of the battle royal between Danny Williams and Prime Minister Paul Martin.

AE: What was the most challenging aspect of the process?
BR: The most challenging aspect was the need to criticize some of the policies, actions and words or public figures I mainly admired and knew well. Gearing myself up to call the shots as I saw them, knowing that it may lose friends in the process, but carrying on regardless, was the hardest part.

AE: What was the most rewarding part of the experience?
BR: The satisfaction of knowing that I was telling like it was, come what may.

AE: What did you learn during the process?
BR: I confirmed that the more things change, the more they remain the same. Five or six years after those commentaries were written, many of the faces may have changed, but the problems and issues I dealt with are largely the same.

AE: What impressed you the most about Williams?
BR: His open determination to take on all comers, no punches and no holds barred, whether it was Prime Ministers Martin and Harper on the Atlantic Accord and equalization, or the gigantic oil corporations for better offshore royalties, or Premier Jean Charest on the Lower Churchill development. No opponent fazed the man.

AE: What did you not like about the man?
BR: An aspect of my answer to the previous question: If you weren’t completely on his side in his battles, if you criticized a point or disagreed with his process, you were the “enemy” and considered disloyal.

AE: What has the response to the book been like so far?
BR: Although the book has only been in stores for a number of days, the response is growing as I write. Thus far the reaction has been gratifyingly positive. One comment I particularly appreciated hearing on a call-in show from a reader was along the lines of, “One thing you can say about Rowe – he doesn’t kiss anyone’s backside.”

AE: What happens now? - Are you working on something new?
BR: I am now in the middle of writing another novel – my third work of fiction – which I’m aiming to have published in 2012. I’m intending to try to put out a book a year – fiction or non-fiction – for the next few years.