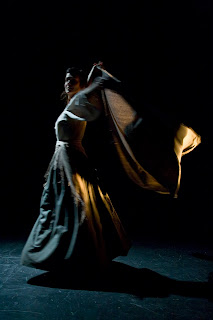 Halifax’s 2b Theatre Company was founded in 1999 and has since staged 15 productions, including 11 world premieres. Since 2004, the group’s work has been nominated for 34 Theatre Nova Scotia Robert Merritt awards, including 4 nominations for best production. In 2010, 2b was awarded the Scotland Herald Angel Award for their production of Invisible Atom at the Edinburgh Fringe Festival. In 2008 2b took home 3 Merritt Awards (Best Director, Best Lighting Design, and Best Actor). At home and abroad 2b has earned a reputation for work that is innovative and precise, intelligent and moving. Recently AE spoke with Christian Barry about the troupe’s new production, The Russian Play & Mexico City, which runs from November 29-December 4 at the Neptune Theatre in Halifax.
AE: How long have you been involved with 2btheatre?
CB: I was one of the co-founders of 2b in May 2000. Anthony Black and I have been the Artistic Co-directors since 2004.
AE: What are the biggest challenges of your profession?
CB: This is a big question. In many ways, the challenges are endless: We search for inspiration, struggle to build audiences, fight for funding...But truth be told, the most challenging and most fulfilling aspects of our work lie in the creative process. In the rehearsal room we are constantly searching for elusive moments of magic and authenticity. It requires extreme dedication from all members of a creative team. Moment by moment we try to create theatre that will live and breathe with an audience. For me, the best theatre deeply engages the imaginations of the audience, and to build moments that sustain that requires rigour, precision, and real commitment.
AE: What inspired you to choose to put on The Russian Play & Mexico City?
CB: In short, these are some of the best pieces of theatre writing to come out of Canada in the last decade. Hannah Moscovitch writes with a precision and an economy that is remarkable. She writes very theatrical works that are designed to engage an audience directly. Often, as is the case with these two short works, Hannah’s characters are not only very sympathetic 3-dimensional people that audiences feel very connected to, but they also speak directly to the audience, breaking the metaphorical “fourth wall”.
AE: Are there any unique challenges in putting this particular piece together?
CB: When the writing is so spare and precise, it requires extra accuracy from the performers. You can’t waste a word. If you don’t understand every thought, breath, and movement, it will show. I’m lucky to have a very talented and dedicated group of actors working on this piece.
AE: What can audiences expect to experience during the run?
CB: Sexy, funny live theatre that will leave you thinking about love and all it’s dangers and joys.
AE: What are your thoughts on the current state of theatre in Halifax?
CB: There is a very vibrant and diverse theatre scene in Halifax. Sometimes audiences need to go digging a bit to find it, but the independent community here is really thriving. Companies like 2b, Zuppa Theatre, and OneLight are making very smart, entertaining, contemporary work, and we’re all touring it across the country. In the last few years, 2b has had shows in Toronto, New York City, Australia, New Zealand, Vancouver, Edinburgh, Ireland, Nashville, and lots of other places. So there’s lots of world-class work happening, but we are in need of a visible home. Hopefully within the next few years you will see a new state of the art performance facility in Halifax for Theatre and Dance companies.
AE: What are your thoughts on the current state of theatre in Atlantic Canada?
CB: I think arts companies across Atlantic Canada are facing similar challenges to those of us in Halifax. Arts funding is really difficult in the current climate. But there’s lots of great energy out there. And Artists are historically very skilled at making things work in tough economic times. It’s inspiring to see leaders like Mayor Naheed Nenshi in Calgary recognizing that the Arts play a huge role in making our communities great places to live. If more of our leaders thought like Mayor Nenshi, we’d all be better off. But for now, we hope Haligonians will come and spend a night at the theatre with us...Come see The Russian Play & Mexico City. We think you’ll have a great night out.
www.2btheatre.com