The Passion of Pursuit 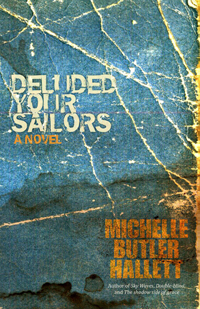 Michelle Butler-Hallett has been making up stories for as long as she can remember.
“My grade-two teacher assigned a lot of creative writing,” shares the St. John’s novelist, playwright and screenwriter via email. “Once I connected making up stories with writing them down, that was it. I saw what I had to do and pursued it.”
That pursuit has since become a passion, with the writer penning three full-length narratives in the last five years; Double Blind (2007), Sky Waves (2008), and her latest effort deluded your sailors (Creative Publishing / 300pp / $21.95), the intriguing, intertwining account of a woman whose discovery of crucial documents threatens a government-funded tourism project, a Reverend, and the eighteenth-century daughter of a nameless prostitute.
“The novel has two storylines,” she explains. “One takes place over ten months in a Republic of Newfoundland and Labrador, and the other stretches from 1718-34 in England, and in fictional islands in the Mediterranean, Massachusetts and Newfoundland.”
Butler-Hallett notes that the new tale had been rattling around her head since 1990.
“The storyline grew out of Sky Waves, and some characters from Sky Waves recur in deluded your sailors. But you don’t need to read Sky Waves to read deluded your sailors. The novels are linked but not serial.
“And I finally got that bloody eighteenth-century storyline out in a form that I’m not ashamed of,” she adds. “Those voices have been demanding attention for many years, muttering and screaming.”
Still, despite the relief, the scribe found the process satisfying.
“I love my characters,” she smiles. “I don’t like all of them, but I do care deeply about them all. Seeing them suffer and also find love, hope and scraps of grace is fulfilling. Growth: there’s the reward - growth of my characters and in my abilities to tell a story.”
It is a growth that has not come easily.
“I’ve been wrestling with an autoimmune arthritis since 2009. The pain and disability are teaching me a lot about patience, anger, helplessness and strength. I drew heavily, though not directly, on that for deluded your sailors.”
The discomfort only seems to drive her passion.
“I’m focusing on some short stories for a while, getting a collection together, and outlining longer pieces. I’m also taking a class in the graphic novel. I don’t draw well, but I love the comic form for storytelling and really want to pursue it.” ~ SPC