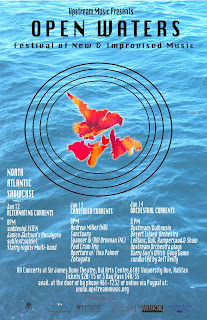 Open Waters Festival 2012 is an exciting three-day North Atlantic Showcase of new and improvised art music by Atlantic Canadian composers, performers and producers. On January 12, 13, 14, the festival will highlight freedom of expression with innovative compositions, inspiring musicians and ground-breaking performances. Recently AE spoke with the festival’s organizer Paul Cram.
AE: What inspired/motivated you to start this festival?
PC: The core reason for the Open Waters Festival is to give cohesion to a scene that is largely over-looked these days in popular culture. There is a lively art music contingent at work in undergrounds the world over and guess what? There is a contingent in Atlantic Canada concurrent that has laboured for the past 30 years presenting scattered concerts often at odds with itself. The Open Waters Festival seeks to remedy the situation by showing the scene in all its glory and creating its own “North Atlantic Music Showcase” to put the scene in a position to move off-shore. To this end the festival is inviting festival artistic directors, writers, agents and promoters of new music to hear what we’ve got for export.
AE: How has it grown over time?
PC: Open Waters was the title of the only album by the Upstream Ensemble which first performed in Halifax in 1990. In 1997 and again in 1998 the Open Waters Festival  of new and improvised music began with a collaboration with Symphony Nova Scotia  and Upstream Music that brought two distinct practices together - precisely notated composition and free improvisation. The collaborative spirit died with the millennium and internal politics and was kept alive by Upstream and later with suddenlyLISTEN and Oscillations. With the gradual building of Upstream’s capacity as a presenter and arrival of new groups, a multi-faceted scene has emerged.
AE: Why is this an important event for Halifax?
PC: It is an important event for Halifax, because it shows the city off  as a player and a  place to do creative work. The great music cities of the world all have lively avant-gardes where research and development happens and positive energy trickles up the idea chain.  It’s good for business.
AE: What can audiences expect this year?
PC: Whether you like it or not is not important – it is music for music’s sake that shrinks time, creates controversy and builds sense of place.
AE: What are your plans for the festival in the coming years?
PC: We plan to continue the event on a regular basis, so the musicians know it’s here and build themselves accordingly.
http://www.upstreammusic.org/