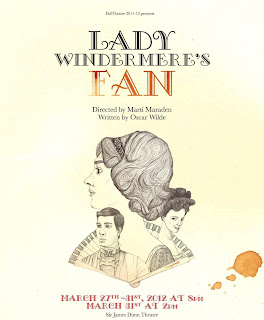 A catastrophe strikes the marriage of young Lady Windermere. How could her husband have an affair? Can he really be so cruel as to invite her rival to their house? Or might an unexpected kind of enduring love explai...n everything? Oscar Wilde's first stage hit combines the dazzling wit of his latest comedies with the emotional rollercoaster ride of a classic melodrama.
The Dalhousie Theatre Society production of “Lady Windemere’s Fan” should do two things: one, entertain an audience of paying theatre patrons, and two, provide students in the theatre department with an experience that will advance their skills and understanding of their craft.
Whether the play does the first is for the patron to decide. But the choice of play, despite being set in the 18th century, is still relevant for today’s audiences.
As for the second, director Marti Maraden (who wasn’t involved in the choice of the play to be performed, and therefore is somewhat objective) says that the team at Dalhousie made a fabulous decision. “The staff at Dalhousie know their students well,” she says. “They thought it would be a wonderful showcase for the graduating class.” Maraden is a veteran actress an director at both the Stratford and Shaw festivals.
Maraden outlined how it is not only theatrical skills that are being gained through the production, but also costume, set design, and technical skills.
A group of eighteen acting students is involved in the production: sixteen fourth year students and two third years. She detailed how for many of these students, though it be their graduating piece, it is their first real period piece. For her as a director, it meant teaching students to use a walking cane properly and how to use a fan.
A woman’s fan was not merely a tool for moving air, but was a system for sending messages that were inappropriate to verbalize. The importance of the fan was such that Oscar Wilde chose to include it in the title of the drama. It is not merely about Lady Windemere, but about the message that her fan sends. If a woman fanned herself slowly, it meant she was married. If she fanned herself quickly, it meant she was engaged. If she wanted to tell a man she loved him, she would draw a closed fan across her cheek.
Perhaps Lady Windemere’s actions with her fan intensify the conflict within the play. The audience members must decide how much of an individual’s morality is determined by intention, and how much of morality is determined by action. Is a suggestion of impropriety enough to make someone “bad”? Director Marti Maraden says, “It takes us the whole journey of the play to determine who the good woman is. It explores the way we judge people as good or bad.” The play raises the question whether a “good action” in the present can erase “bad actions” of the past. Despite the Victorian Era’s codification of morality, Wilde raises a question of whether it really is possible to discern whether an individual is good or bad, or whether the system is classification even holds. ~ Jen Powley
Lady Windermere's Fan until March 31 at the Sir James Dunn Theatre, Halifax.
Tickets for all shows are now available for purchase through the Dalhousie Arts Centre Box Office, in person, over the phone at 494-3820, or online. All tickets are general admission, $14 regular, $7 students and seniors.
www.theatre.dal.ca