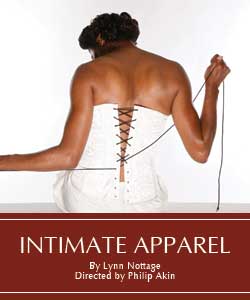 From February 28 until March 25, Neptune Theatre in Halifax presents Intimate Apparel, the story of a young seamstress coming of age in New York City at the turn of the 20th century. AE's Stephen Patrick Clare and Michelle Brunet share their respective perspectives on last night's pay-what-you-can performance.
----------
Like both The Colour Purple and The Help, Lynn Nottage’s Intimate Apparel weaves together threads of identity, belonging and dignity amidst racial and social division.
Making her Neptune debut, Raven Dauda is simply sublime as the thirty-something seamstress Esther Mills. Neither understated nor overwhelming, Dauda stitches bits of soul into a soft quilt of character.
Her courtship by mail with George (Kevin Hanchard) leads to a marriage that unravels as their truer selves emerge. The couple’s connection is alchemical, with each bringing out the base elements in one another. Audience acknowledgement – by way of nods and hmmms – affirmed the actors’ authenticity.
Strong support from Bridgey Ogundipe (Mayme), Satori Shakoor (Mrs. Dickson) and Lesley Smith (Mrs. Van Buren) sews the storyline together with sure strands of dialogue. A swathe of comic relief from the Hassidic Mr. Marks (Jeff Schwager) is welcome and well-woven into the script.
Kudos go to director Philip Akin for assembling a solid cast, and a special shout-out to Sean Mulcahy and crew for embroidering a spectacular set design.
Like the gentle fleece of a favourite fabric, Intimate Apparel is certain to keep theatre-lovers warm through these cold winter soirees. ~ SPC
----------
Last night, Neptune presented its second preview of Intimate Apparel by Pulitzer Prize winner Lynn Nottage. A strong cast and compelling storyline made for an impressive and engaging performance.
Set in New York City, circa 1905, the story centers on Esther Mills, an African-American woman who sews lingerie. Her clients pay for her talent, but also her discretion. What results are a series of intimate conversations and relationships, with Mills struggling to decipher which ones are genuine.
The actors blossomed into their roles over the two-hour drama. Raven Dauda (playing Esther) seamlessly switched emotional gears, and Bridget Ogundipe’s (Mayme) sweet songbird vocals soared across an attentive audience. Jeff Schwager did well to create a loveable character out of Mr. Marks.
All told, Intimate Apparel’s multi-climactic storyline, its intriguing, four-room set and above-average acting makes for a wonderful night of theatre. ~ MB
www.neptunetheatre.com