Gaylene Buckle, TNL’s General Manager, has been with the organization since 1995. She says, “There's not much I don't love about the organization,” sharing that TNL’s artists, staff, Board of Directors, audience, patrons and partners have been phenomenal throughout the years. Recently Buckle talked to Arts East about this year’s Gros Morne Festival.

When did the Gros Morne Theatre Festival begin?

GB: The Festival began in 1996, but essentially began with the creation and performance of the Ethie dinner theatre during the summer of 1995.  Nineteen years later, the Ethie dinner theatre remains the 'anchor' of our Gros Morne Theatre Festival. Drive 20 minutes from Cow Head to Sally's Cove and you will find the rusted remains of the actual S.S. Ethie coastal steamer where she ran aground in December, 1919. The Ethie tells the story of the crew and passengers and the legend of a Newfoundland dog who some newspaper reporters of the time credited with the safe rescue of all passengers and crew. But was there really a Newfoundland dog or just the creative writing of an early 20th century reporter? A number of books, a poem, a hero's collar and a Ripley's Believe It Or Not cartoon say the dog did indeed save those souls!  Hmmmm…

For those who have never attended the Gros More Theatre Fest, what would you like them to know?

GB: The Gros Morne Theatre Festival produces a six-play repertoire theatre festival - everything from drama, comedy, music and dinner theatre. Our plays are presented in two venues: a 96-seat black box theatre, The Warehouse Theatre, and our second stage venue, the Ethie Room, located next door in the Shallow Bay Motel.  The festival runs from May 31-Sept. 14 and from mid July to the end of August you can take in two shows each night from Tuesday to Sunday. Monday nights feature guest musical & theatre artists in our Who's Darkening Our Door Tonight Series. There really is something for everyone at the Gros Morne Theatre Festival. Our performance venues are small and intimate and make the audience feel very much a part of the action on stage.

"Our performance venues are small and intimate and make the audience feel very much a part of the action on stage."

What are some highlights at this year's festival?

GB: So many highlights! We're super excited to bring our play, With Cruel Times in Between by Sara H McDonald, which is based on the works of Al Pittman, to our professional stage. We created this play in 2011 as part of a Youth Theatre Island Exchange Project with Second Storey Theatre Company of Launceston, Tasmania, and toured it along with a play from Second Storey, to Tasmania and Newfoundland. Last year we hired an emerging artist company - The Apprentices (thanks to the support of RBC Emerging Artists Project) and performed it a number of times in Western Newfoundland on its own and in conjunction with celebrations commemorating Al Pittman. This year we have included it in our Gros Morne Theatre Festival repertoire and will be showcasing it at Contact East in St. John's on Sept. 29, with hopes of touring it provincially, nationally and internationally.

Another highlight is Newfoundland Vinyl-The Flip Side, directed by Jeff Pitcher with musical direction by Allison Crowe. The play is a musical comedy featuring the music of Newfoundland & Labrador's singers from the 1960s, 70s and 80s. As a pretty cool offshoot of this play, Allison Crowe has recorded a Vinyl LP - Newfoundland Vinyl - of 10 of the songs performed in the show. The LP also comes with a digital download option for those who may no longer have a record player in their living room.

What makes the Gros Morne Festival different from other theatre festivals?

GB: The Gros Morne Theatre Festival's vision is to present plays that reflect the lives of rural Newfoundlanders and Labradorians. Our Festival provides our visiting audience with a glimpse of the culture, lifestyle and history of our part of the world; and provides our local audience with plays that are relevant to their lives, culture and history. Many of the plays we produce, we also commission and create. Other plays we include in our season come from other parts of the world, but are relevant to who we are.  This year's season includes two plays from English playwrights: Two by Jim Cartwright, a comedy set in a rural English pub, features two actors who take on dozens of characters, many of whom you would probably recognize from your own community pub; and Belle of Bonavista Bay by Philip Goulding, a comedy/drama (with lots of music) about a young modern-day Newfoundland woman who makes the trip to Poole, England to find out more about her ancestor Eliza Bennett, who was forced to immigrate to Newfoundland in the 1800s.

“We're super excited to bring our play, 'With Cruel Times in Between' by Sara H McDonald, which is based on the works of Al Pittman, to our professional stage.”

How does Theatre Newfoundland Labrador foster regional talent and culture?

GB: Theatre Newfoundland Labrador's mandate is to develop and maintain a growing arts community on the west coast of Newfoundland & Labrador. We take that very seriously and never lose sight of who we are. The majority of professional playwrights, actors, directors and designers we contract are from Newfoundland & Labrador and Atlantic Canada. We always leave room in our Gros Morne Theatre Festival company for emerging artists, most of whom are currently studying theatre at Grenfell Campus of MUN in Corner Brook. Our technical staff come from across Canada and include students of post-secondary theatre programs in Newfoundland & Labrador, Nova Scotia and Ontario.

Our 'story' is the centre of what we do. We have developed a number of plays over the years and some have gone on to tour provincially, nationally and internationally. Tempting Providence by Robert Chafe is probably our best known production. We commissioned the play in 2000, premiered it in 2002 and since then have performed in more than 600 times, taking it to more than 160 communities throughout Canada, the UK, Australia and the US. Other notable commissions and creations have been The Double Axe Murders & The Oracle of Gros Morne by Berni Stapleton and Isle of Demons & One Foot Wet by Robert Chafe.

And, of course, Neddy Norris Night is a prime example of fostering regional talent and culture. This musical show has been part of our Gros Morne Theatre Festival since 1996, and while it takes on a different theme each year, it always celebrates the music and stories of our past—songs and stories that have shaped who we are today. Stephanie Payne, a talented musician from Cow Head, has been a performer and musical director of Neddy Norris Night for many of those years, including 2013.  She brings an honest and passionate flare to this production. Audiences leave feeling as though they've just spent 90 minutes at a kitchen party in some small community on Newfoundland's northern peninsula.

“It’s about preserving our rich history through the stories we tell. It’s about providing valuable work for talented theatre professionals and students of theatre … the Gros Morne Theatre Festival is about keeping a community alive.”

GB: TNL is an active member of the Professional Association of Canadian Theatres (PACT). Founded in 1979 by the late Maxim Mazumdar, Theatre Newfoundland Labrador (TNL) operates a year-round professional theatre company from its home base in Corner Brook. From September to May, TNL produces professional theatre, community and youth programming in Corner Brook, a repertory summer festival in Cow Head, Gros Morne National Park and regular national and international touring of plays like Tempting Providence by Robert Chafe and Stars in the Sky Morning by Rhonda Payne. TNL is about quality theatre. It’s about preserving our rich history through the stories we tell. It’s about providing valuable work for talented theatre professionals and students of theatre. And as a bonus, the Gros Morne Theatre Festival is about keeping a community alive.

To learn more about the Gros Morne Theatre Festival, visit: 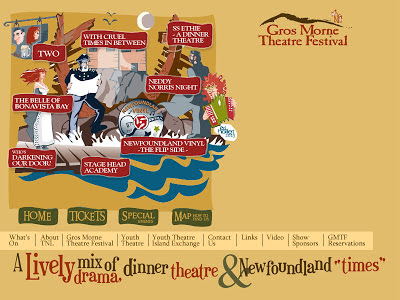