Two of tonight’s seven Halifax Jazz Festival shows include: Phin Performing Arts (and guests) presenting the transdisciplinary (sound, movement and narrative) production, By the Roadside; and Asia & NuGruv will be heating up the festival tent with Lee Fields & The Expressions. (Don’t forget the free daytime concerts from 12-5pm!)
http://halifaxjazzfestival.ca 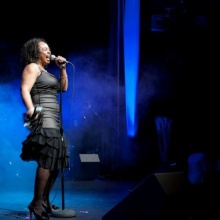 How did you first get into music?
Asia: I started singing in my community church, St Thomas Baptist Church, North Preston at the age of 8...The first solo I sang in the youth choir was "Going Up Yonder".
Nathan Symonds: I have a musical family, so it's in the blood!! :) My mom use to sing in church choirs, and a couple of my uncles had a few bands. I was always attending my uncles’ band rehearsals and became very attracted to the bass guitar. From there I started playing and jamming with them eventually. I played in a couple bands, (RNB and gospel) before myself and Asia started, Asia & NuGruv. The uncle whose band rehearsals I use to attend, is now the lead guitar player for Asia & NuGruv!! :):)

When did Asia & Nugruv first come together and start performing?
We got together in 2004 and started performing in 2005, and have been performing ever since.

What have been some of highlights for the band so far?
The band has had some great highlights, so far in our career. To name a few, we were featured in a short film Believe It produced by Truce Films, which was shown at the Atlantic Film Festival. The band was also a musical guest of the first episode of the Candy Show which aired on APTN. Asia & NuGruv are multiple African Nova Music Association Award Winners, and have built a strong fan base over the years :).

How would you describe Asia & Nugruv's musical style?
High Energy with a NuGruv!! :):):)

What will audience members experience at your performance tonight?
They will experience a band that has passion for what they do, and hope they will feel the energy that will be created on stage.

Which acts do you want to catch at this year's Halifax Jazz Fest?
Looking forward to seeing Lee Fields and the WAILERS!! and of course our local performers. 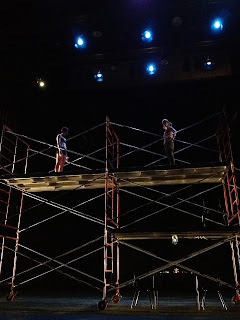 Phin Performing Arts, a contemporary dance company whose productions fuse with multiple forms of artistic expression, was founded by spoken word artist/trans-disciplinary researcher Ardath Whynacht, choreographer/dancer Lisa Phinney Langley, dance artist Sarah Rozee and visual artist/ Dalhousie Arts Gallery curator Peter Dykhuis. Whynacht shares the many “languages” that Phin Performing Arts “speaks,” and how tonight, “a poet, a drummer and a curator [will] walk into a bar,” along with Ria Mae and STICKS!


How did the four of you come together to form Phin Performing Arts?
AW: We have been collaborating with each other in various capacities for over a decade, but after a tremendously successful show in 2009 we thought it was time to formalize our collaborative relationships into a company that reflected our values—and our commitment to relationship building and experimentation across disciplines. We are, in some ways, a cast of unlikely collaborators—but that is the fun part.

How would you describe Phin Performing Arts' productions/mandate?
AW: We love to experiment!  At heart, we are rooted in contemporary dance and under the artistic direction of Lisa Phinney-Langley, movement is our first language... But we speak many and are learning to speak more. We are currently working on an in-studio residency at the Dunn Theatre for a piece that will be premiering for Live Art Dance in October. This piece blends movement, storytelling and architecture in a piece that began originally with the work of Edgar Allen Poe. The Jazzfest show is our chance to develop creative relationships with nontraditional musicians and work more closely with film and the visual image. Art should be fun, sometimes. We ‘feel’ a lot when we are creating work, and audiences are participants in that (hopefully) they feel something, too. Blending artistic disciplines can sometimes give us freedom to feel new or different things about the art that we see.

What will audience members experience at your performance of By the Roadside tonight?
AW:  “A poet, a drummer and a curator walk into a bar”... It sounds like the beginning of a joke, I suppose. As for what to expect we don't really know! The show is very much an experimental, spontaneous, performance installation. We are creating a live tribute to the era of silent films and the first ‘talking pictures’ and exploring a little known element of the Bonnie and Clyde story. As early as the late 1800s, silent films featured live musical accompaniment and other sound effects in the theatre. We were very much inspired by the celebrity aspects of the Bonnie and Clyde story and how this contrasted with the sad reality of life during the depression. We can say there will be live bodies, moving images and some awesome musical accompaniment!

What styles of music will compliment or be showcased in the performance?
AW: We are so lucky to have Ria Mae and STICKS on board with us for this show. Ria Mae is a singer/songwriter whose sound blends contemporary folk and pop. I've always thought she had a 1920s timbre... and a bit of Johnny Cash attitude that fits with the feel of the show. Her sound is hard to pin down- she won an ECMA for best pop recording last year, but she collaborates regularly with folk singer-songwriters, hip hop performers and is working on her second album with rapper/producer Classified. STICKS is a performance drummer and DJ who will be doing some percussive remixing, providing beats and improvising the score with Ria, who will be singing and playing electric guitar. STICKS is really versatile and has performed with Squid and Ashley MacIsaac and also performs solo as a drummer and DJ. They are going to help us put a contemporary take on the Bonnie and Clyde story—blending everything from their own original work to some unexpected favourites.

Which acts do you want to catch/have you caught at this year's Halifax Jazz Fest?

AW: I am just speaking for myself on this one—but I am a huge fan of A Tribe Called Red and their show lit me up…in the best possible way. We adore the Oore brothers. Both Cyndi Cain and Asia & Nu Gruv are always phenomenal. I'm a big Doris Mason fan. I wanted to go on the Theodore Tugboat drumming boat cruise but apparently that one's just for kids. Can't adults play drums on small tugboats that wear hats?  Seriously, though I am also really looking forward to the Nuna Siku show with DJ Spooky and Kulavak. There's just so much great music this time of year. The artistic direction for Jazzfest is bang on. We're so happy to be involved this year.

Check out Phin Performing Arts’ By the Roadside tonight (July 11, 8pm) at The Company House.
http://phin.ca