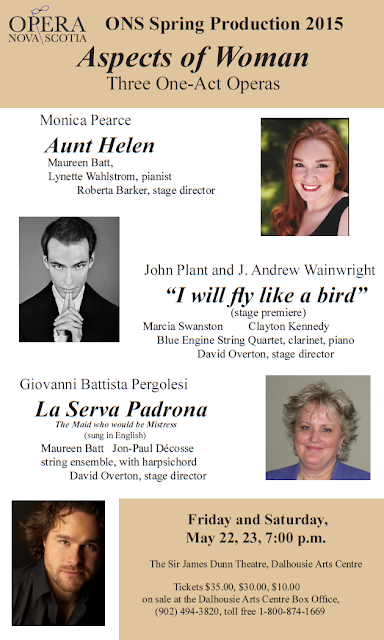 Opera Nova Scotia’s Spring Production will explore Aspects of Woman through the performance of three mini-operas this weekend at The Sir James Dunn Theatre in Halifax. Recently we caught up with co-director David Overton about the production.

What are your own roots?
My roots are in theatre. I was a professor in the theatre department at Dalhousie for forty years, and have been actively engaged as a director for most of that time.

How long have you been involved in opera, and in what capacity?
My involvement in opera as a director goes back to the eighties when I was engaged by the Dal music department to work on their production of Gianni Schicchi. I have subsequently directed several operas for Opera Nova Scotia. I've always been interested in opera as a form, however, and my awareness of it goes back to my childhood and my father's passion for the great mid-century singers.  pera was always a part of the musical world in our house, and has remained so for me.

What inspired this particular production?
My involvement in this production arises from my being asked by Walter Kemp to direct La Serva Padrona, and then being asked by Andy Wainwright if I would work on the opera he and John Plant had written called I Will Fly Like a Bird. I knew La Serva Padrona because I'd directed it before back in the eighties, and I knew the other piece because I'd seen its premiere at Scotiafest two or three years ago. Serva is always fun, and the chance to work on it again after so many years, and to rethink my approach to it, was very welcome. And the opportunity to work on an original piece of the quality of Fly Like a Bird, to direct the first staging of it, is a wonderful chance to create something new.

What are the challenges involved?
The primary challenges are pragmatic ones: budgetary restrictions, shortage of rehearsal time, limitations of rehearsal space, that sort of thing--the things you encounter with any production. But there are aesthetic challenges as well. To create a theatrical piece out of something that wasn't necessarily designed to be theatrical, as in the case with Fly Like a Bird, is a challenge that I welcome. To layer a kind of metanarrative over a pre-existing narrative so that it makes theatrical sense is very exciting. In the case of Serva Padrona, the discovery of new comic possibilities within a piece that has had so many different productions over the years is a lovely challenge.

What are the rewards?
For me, the major rewards are in the rehearsal process and the discoveries that are made. The collaborative process, the contributions that everyone makes to the final product, the spirit of generosity in the room--those are the things I value most. I love to see performers discovering things in themselves that they weren't aware of. I love the way in which the unsung creative staff--the designers of all the various visual and auditory aspects of the production--contribute to the process. Ultimately, of course, the process is only complete when an audience shares the experience, so the final reward is the audience themselves and their reactions. I should add that a bonus for me in this production is sharing the bill with the work of my former Dalhousie colleague Roberta Barker, who is directing another original piece called A Visit From Aunt Helen.

What can audiences expect during the run?
Tears and laughter, I suspect. These are two wildly contrasting pieces that between them run the emotional gamut. 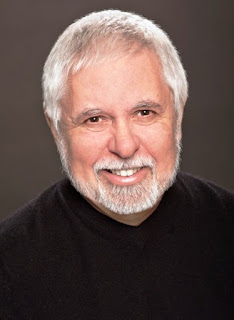 What are your thoughts on the state of opera in Halifax, and Atlantic Canada?
There's a strong and passionate community that creates opera in the region, and a number of remarkably talented performers. But the size of the potential audience makes its economic viability challenging. In large centres, productions that command large budgets are possible simply because the economic scale is different, and this is the kind of production most people think about when they envision an opera. It's the kind of thing people see in those broadcasts from the Met, that are very popular in local movie theatres. Growing up in Vancouver, I was able to see world class singers in large scale productions. Here, the scale is different. Realistically, it has to be. One of the things I like about working on this particular evening of operas is that the scale is right:  these are not reduced versions of something that's meant to be much larger. These are produced on exactly the scale they were meant to be produced on, so there's a kind of integrity about the work that I like.

What's next on your creative agenda?
I'll be directing a double bill of Riders to the Sea (the play) and Riders to the Sea (the opera) for the Fountain School at Dal in February. I think this will be a very exciting project. The idea of pairing these two works is a wonderful one, and I'm looking forward to starting work on it.